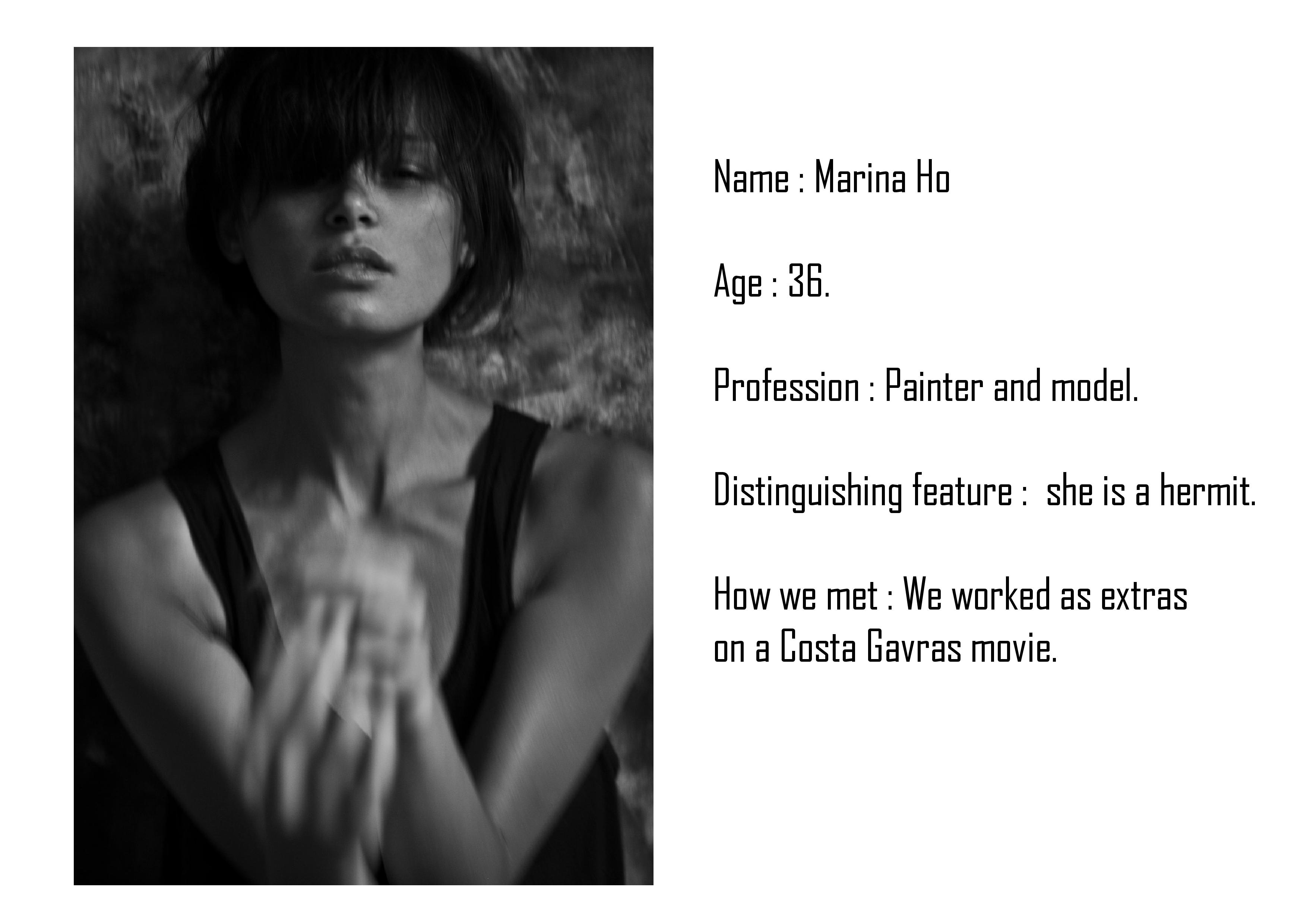 Who is Marina Ho ?

Marina Ho is former model turned painter. Her workshop is in Belleville, Paris, between pho’s and bo-buns, which remind her of her Vietnamese origins.

Marina Ho lives in a souplex, that she needs to protect herself from the outside world. The ground floor is fully equipped for her to indulge in her passion: painting. She always dresses in black, she loves classical music or Sigur Ros. She loves the great painters, movies which take her on a trip, paintings in warm colours. Although this might all seem pretty dark at first glance, I find it mesmerizing and touching. She has this deep voice that soothes you, and no word that she speaks is chosen at random. In another life she would maybe be a storyteller. She is definitely beautiful, but her beauty is one of lovely fragility, one that reflects both a strong woman and a little girl that anything could break. These are the reasons why I had the desire to write this portrait. 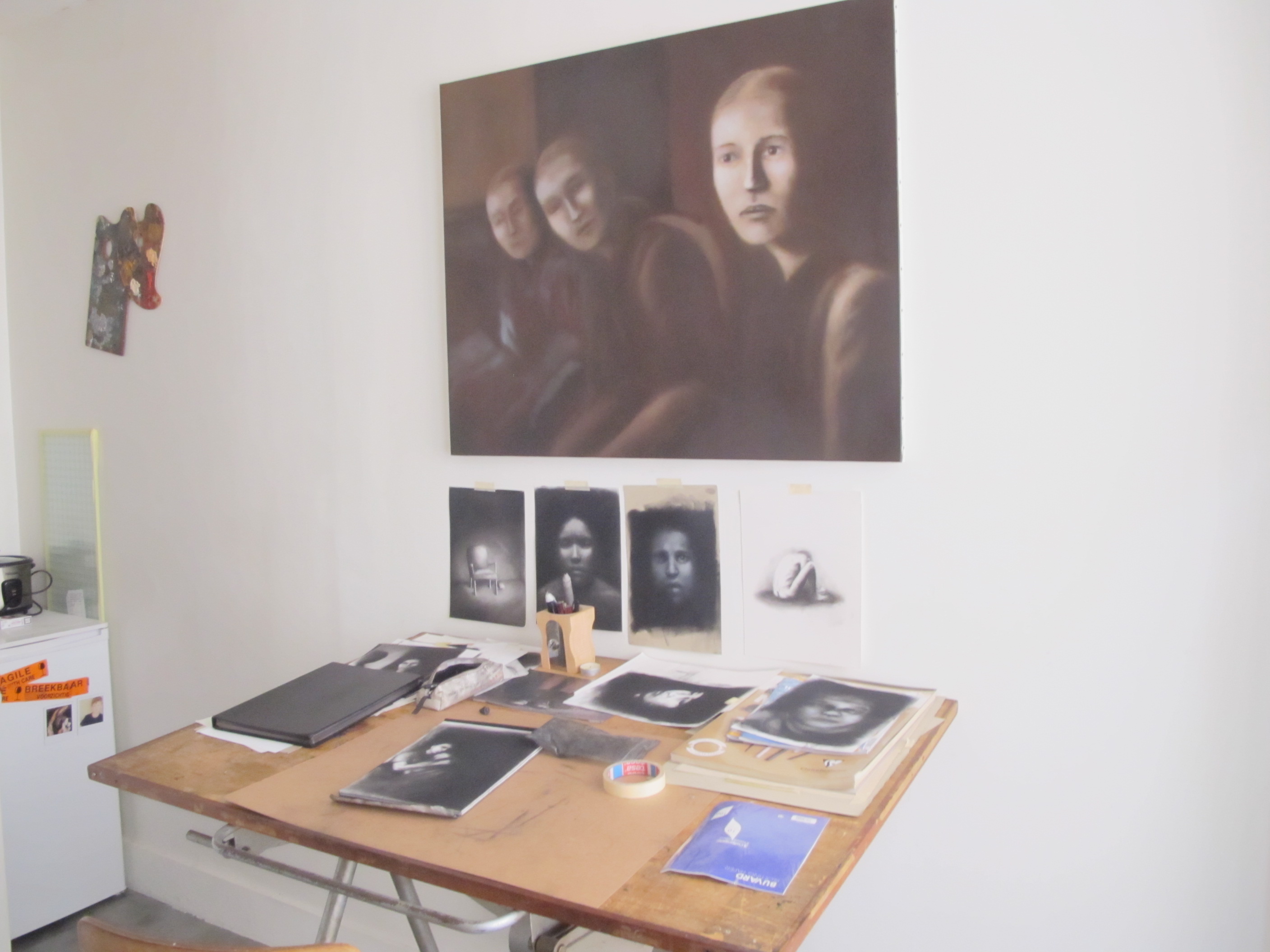 The first time I saw Marina Ho (she will certainly not remember), I worked with her sister, Laura, who is an actor and a model as well. Marina worked in the same photo studio this day, and  she came to say hello to her sister. Judging by Laura’s excitement, I quickly understood that there was a strong bond between the two. Once I saw her at the entrance of the set, I was captivated by her charisma and the way she looked at her little sister.

It was only a few years later that I had the chance to make her acquaintance at the filming of the movie Le Capital by Costa Gavras. On a side note, we were filming in the sculpture hall of the louvre, which is extraordinarily beautiful, and as a historian, this remains one of the best memories that my profession has allowed me to experience. Obviously the filming of a movie is always a long process, so we had some time to talk to each other. Having the same taste in movies, we were able to talk for hours. That day I already got a glimpse of her fragility.

From all the people that I have interviewed, Marina is the only one who said to me “you’re going to let me read it first, right?”. Maybe she feels uncomfortable having people talking about her. Or she is worried that I will distort her words (personally, I think it’s a little bit of both). Anyway, I don’t write these articles to reprint word for word what the artists tell me, but to express what it is exactly that fascinates me. To her request, I just wanted to smile and reassure her “don’t worry, everything will be fine”. 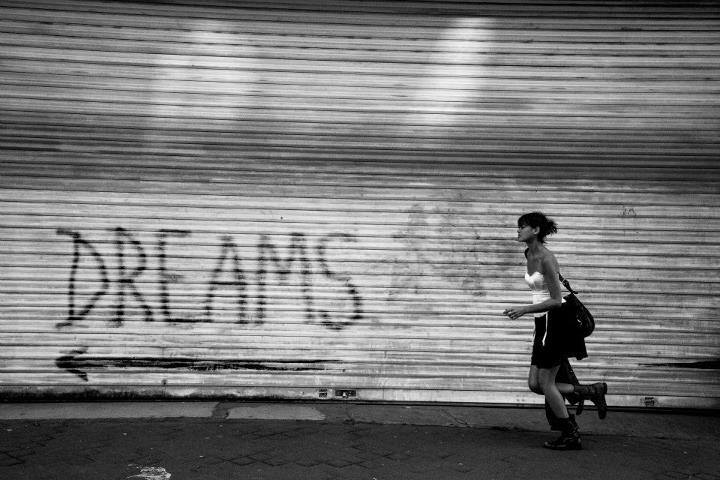 Marina Ho was born a painter. It’s in her heart. She speaks about is passionately. It was her dad, and architect, who sparked her love for the visual arts. She grew up with a pencil in her hand. As a child, Marina was always drawing, continuously, during recess or when she was at home. She had already closed herself off from the outside world to express herself on paper.  She drew giraffes, dragons with three heads. Marina created a cartoon where the hero was a pencil, and therefore had no legs and could move very quickly.

But at the age of twelve, reality suddenly kicked in. The divorce of her parents and the loss of her imagination. She put her crayons and her drawings in a box and didn’t touch them until she was 28. During all these years, her pencils served as nothing more than something to write cheques with. She felt dead inside, deprived of her means to express herself. She lived with her dad until the age of 17, when she left the house with nothing in her pocket. Marina started taking odd jobs as a model. It was an easy way to make some money and be independent, and as it was a business built on relationships. It taught her to express herself towards others.

Bjork’s performance in Dancer in the Dark by Lars von Trier was a revelation for her: she loves “tormented souls”. Marina enrolled in acting classes with the goal of becoming an actress. Acting was a way to escape reality. She chose the Cours Florent, which ended up not suiting her because it was all too formal. For her presentation at the end of the year, she chose to write a parricide, which shocked everybody. She feels like a UFO, misunderstood, and on top of that she has her looks going against her. Everyone is always quick to classify her as a “pretty girl”, while this is not something that interests her. 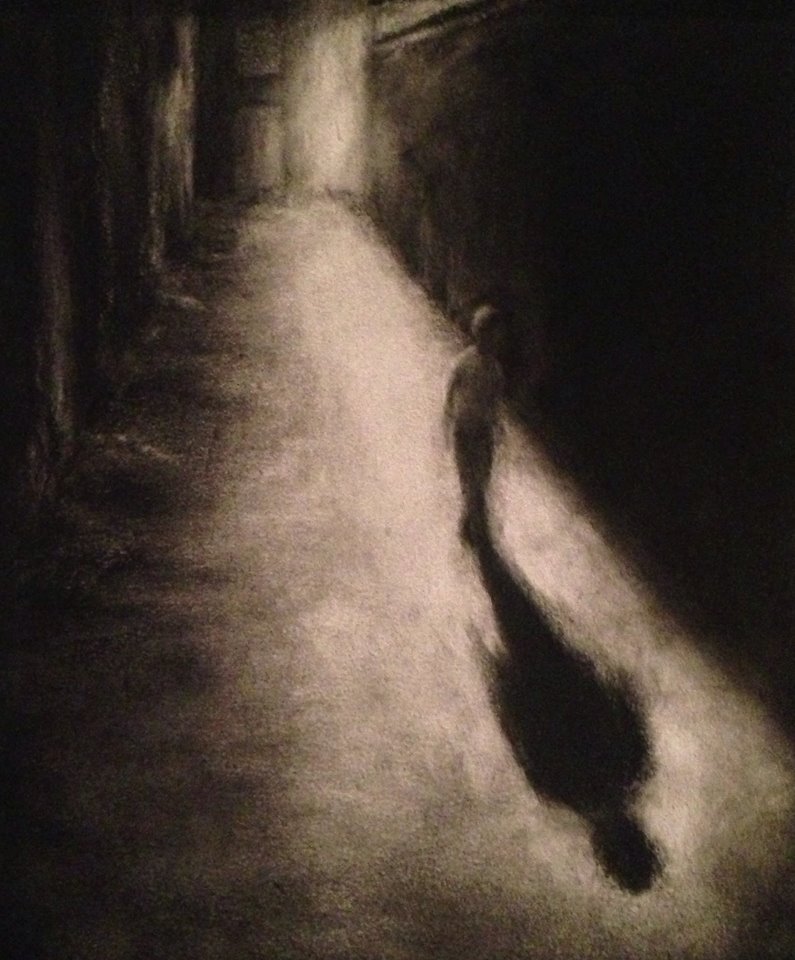 As fate would have it, an encounter at the age of 28 opened her eyes and made her gain confidence in herself. It was like a 2nd birth. The child inside her had been reborn. She opened her box and took out her pencil. Marina Ho rediscovered old drawings. She identified significant details which made her aware of certain things, like closed doors or keys left on the floor, because, drawing is a bit like free associative writing.

During the next two years, she learned to tame the pencil. After she began painting with oil of course, as it is nobler, more sensual, and also more technical. She would have loved to be a student at the Fine Arts with her pouch under her arm. Marina still needed to learn how to paint, as well as to learn to be patient, because the time it takes for paint to dry can be very long. The courses she took with several teachers were disappointing because they were too formal. To her, they were cheaters who were content with copying without necessarily knowing how to draw. The technique is only used to provide accuracy. But it isn’t the technique that evokes emotion. She was only satisfied by the education provided by David Boulanger, a professional painter, who offered her another perspective than the other “by-the-book” teachers. And at the age of 30, Marina had her first exposition. 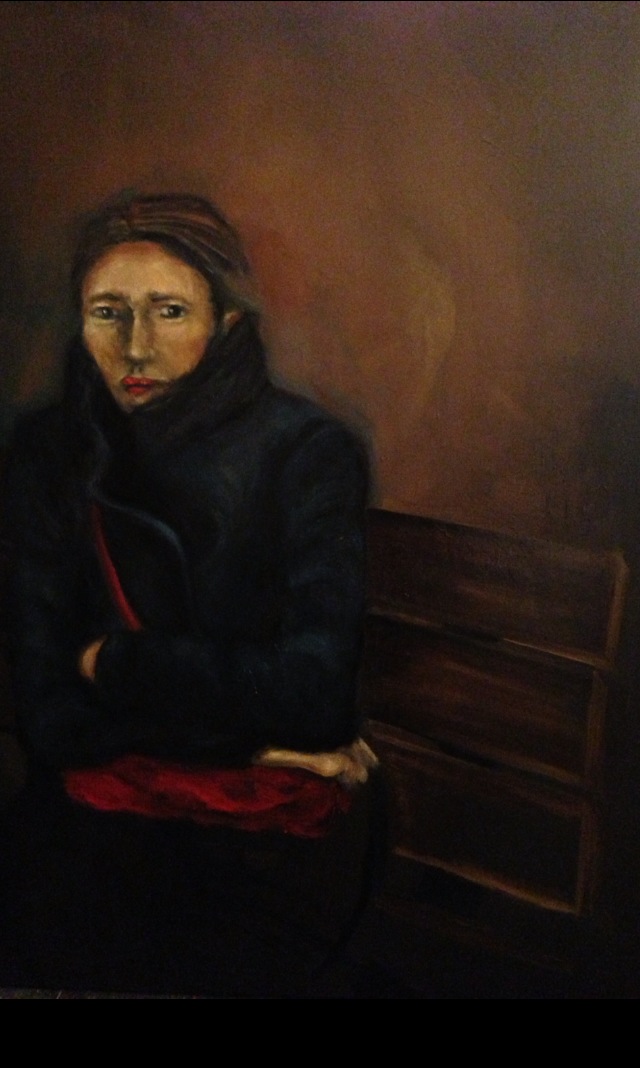 Marina Ho loves emotions. Her paintings are not entertainment. They are nothing but personal. It’s an expression of her childhood and of her experience. She gets much of her inspiration from movies, especially those in black and white. It’s not surprising that she references film-makers like Hanele, Kurosawa, Vinterbeg, Carax and Dolan.

Marina has painted all her lovers, and the people that touched her, even her Vietnamese grandmother. She never knew her but who is a symbol for her. But she never managed to paint her sister. She loves her too much and fears that she will not be able to adequately express the extent of her love in the painting. Marina paints what she finds beautiful. She is fascinated by abandoned shoes. Not a day goes by without her finding some in the streets, well positioned, in pairs. She wonders how they got there, who left them there to continue barefoot. The shoes represent the experience, time, the journey that an individual has travelled. She is also a big fan of Van Gogh’s slippers. 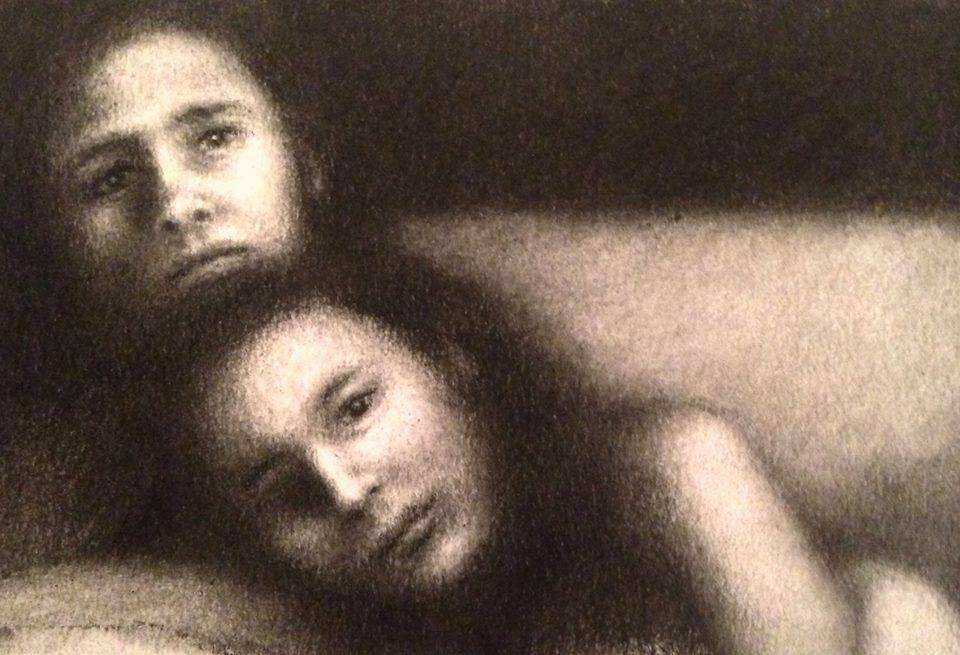 Marina also enjoys to paint atypical and marginal people who she crosses in the street. She would love to have a model pose for her, but has never dared to ask anyone. Like this she is not dependant on other people. In the absence of living beings, she uses her own drawings as support, or photos of herself, except when she paints something spontaneously. Up until this point, her work was mainly focussed on portraits, but gradually, she is beginning to paint landscapes. Because ultimately, it is the environment in which we evolve that affects what we are.

Sometimes she doesn’t paint anything for weeks, because she needs time to mature. The artist is in the making. This may be unfortunate, but it’s necessary. In the meantime, she practices her drawing, or binge-watches movies, and comes back with a range of emotions to paint.. or with the enthusiasm of picking her paint brush up again. 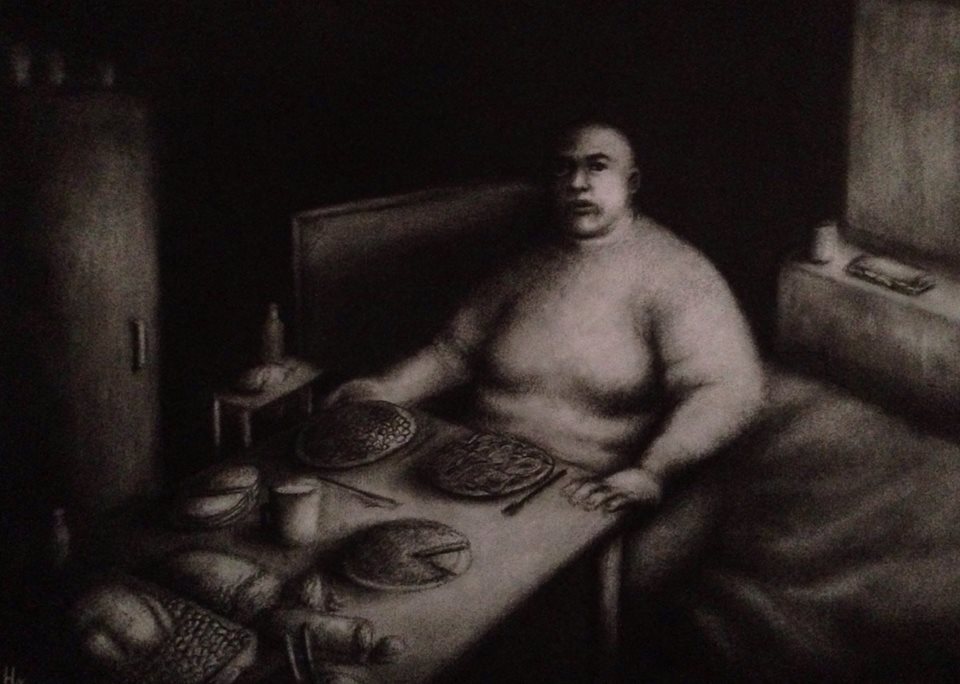 When I ask her what her daily life looks like, she replies without hesitation “torment“. While this may sound pessimistic, it is actually the opposite! The real problem is that she would like to stop time, which is why she captures moments and movements in her paintings. Marina struggles with the reality of time running against her. She is angry at the concept of death and doesn’t understand why we invented such a thing. She loves life so much that she doesn’t want to leave, and it is when she paints that she stops thinking about it and is able to let go.

Marina Ho prefers the light of a candle in the darkness to that of sunlight. The light of the candle is a thing of beauty which emanates into something dark. It is the light in the darkness that symbolizes hope. This is why, in her paintings, she tries to freeze the moment, which is necessarily an emotion, and therefore a moment of life and hope. She told me that if she wouldn’t like other people, she would not be in this world anymore. Marina is a humanist in her own way, with a brush.

To see her work: