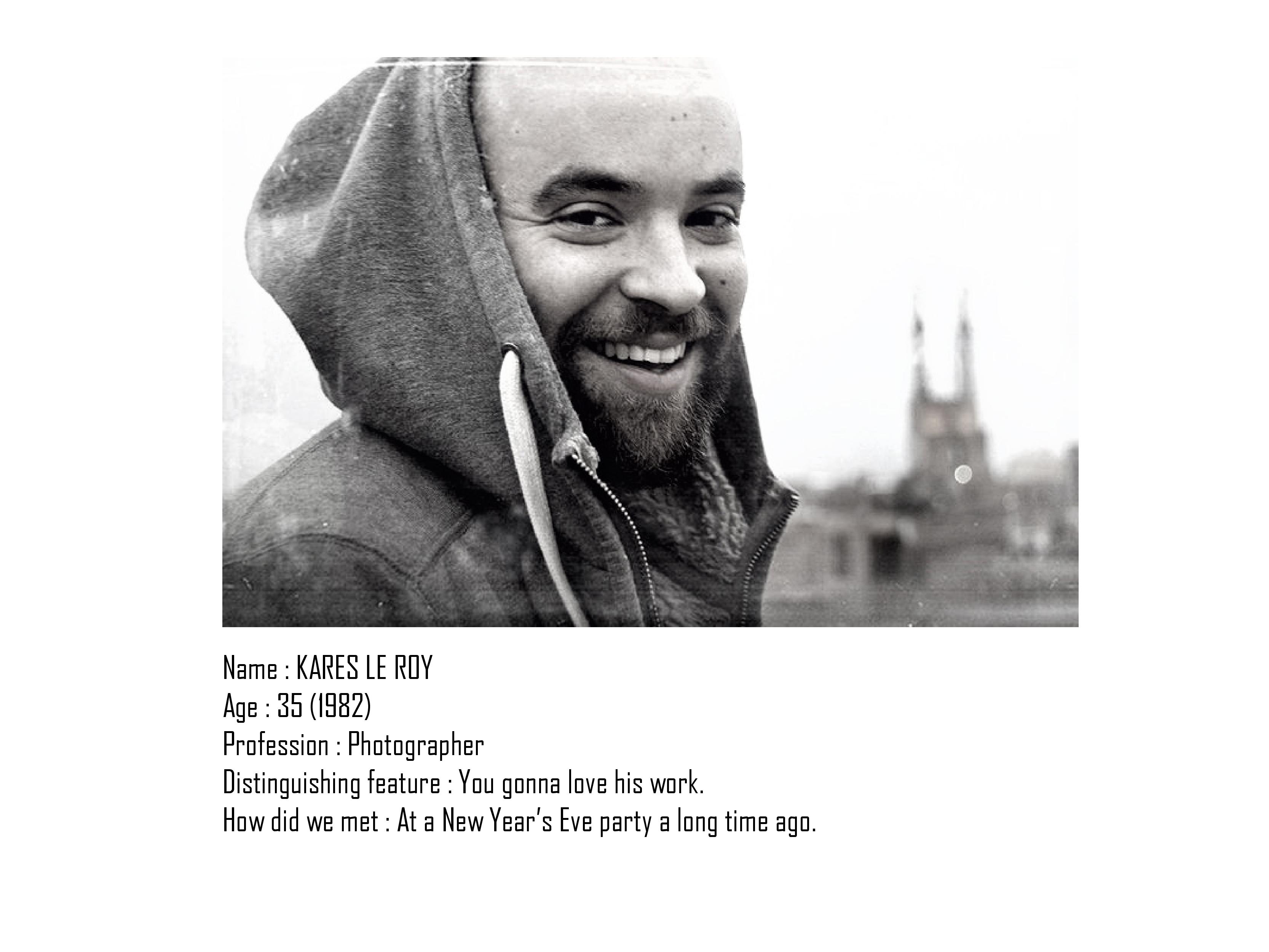 Who is Kares Le Roy ?

Kares Le Roy is a photographer and director based in Paris. He is a great lover of the beauties of the Orient.

Kares and I have known each other for quite some time, and I have seen his work evolve being a bit more amazed every time.

So, I’m not going to hide it, I’m a total fan of his work. I like his approach, his project, his speech, and the photos he takes, but I will try my best to present him to you as objectively as I can.

Writing this article about Kares was a little more complicated than with other artists. Usually when I interview someone, he/she is uncomfortable, awkward, and afraid of saying the wrong thing. Kares is not uncomfortable. Giving interviews is part of his job. But his answers are almost formatted. I felt like listening to one of his previous interviews, and that he only wanted to talk about his latest book. For me, what counts is the journey of the artist, not to promote their latest creation. To an extent, I try to expose their souls, and he did not want to let me do it. But little by little, I got there.

His first steps as a photographer

At a young age, Kares Le Roy was part of a rap group, Rimsland. In his lyrics, he talked about his life, and it is not surprising that in some of his songs he evoked his need to travel and to get out of the straitjacket imposed on us in Europe.

Self-taught, he is interested in photography and graphic design. His first clients are the people he meets daily, that is to say rappers, DJs, musicians. The transition was simple. He talks about this period of his life with a smile, full of good memories and great encounters. He even tried to do fashion photography. I even posed for him as a model. But the world of fashion is not really his thing. Besides, he preferred portraits to full length photos. I remember he said he did not know what to do with his legs on a picture, that he felt like he saw two matches.

When we met for the first time, Kares was already preparing for a career change. Finally, he has not really changed his job, he has remained a photographer, but rather than creating the visual identity of artists, he has chosen to meet those who already have a strong identity. In July 2009, he went on his first long journey, always accompanied by music, especially Stevie Wonder.

56000 Kilometers, A Continent and Men

When he left for Jakarta in 2009, Kares Le Roy had no clear idea about what he was going to do, nor for how long he was going to be traveling. Equipped with his camera, the idea of creating a book had already crossed his mind. Only once he met the Karen tribes of northern Thailand he understood that it is they who interest him, those who live isolated, “forgotten”, those who have kept an ancestral culture. This becomes obvious. But finding the tribes and understanding them takes time.

This trip lasted two years. Kares traveled through towns, villages, monuments, landscapes, the most known areas and the most ignored areas. Along the 56,000 kilometers he traveled from Jakarta to Istanbul, passing through Mongolia, he photographed the men and women he met and their environment. 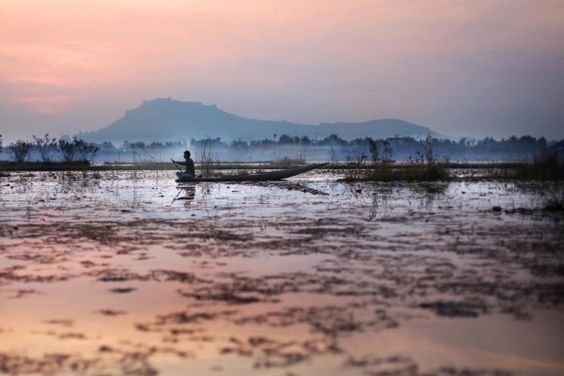 This journey was above all a human exchange. With the barriers of culture and language, it was a real challenge. Kares took the time to live with the tribes, to integrate into their daily life, to be accepted, and then they accepted to be photographed. He didn’t not want to behave like a thief who arrived, takes some pictures, and then leaves. For example, in southeastern Iran, in Minab, it took eleven days until he was able to photograph the women wearing the bandari burka, the red mask with which they cover their burka. 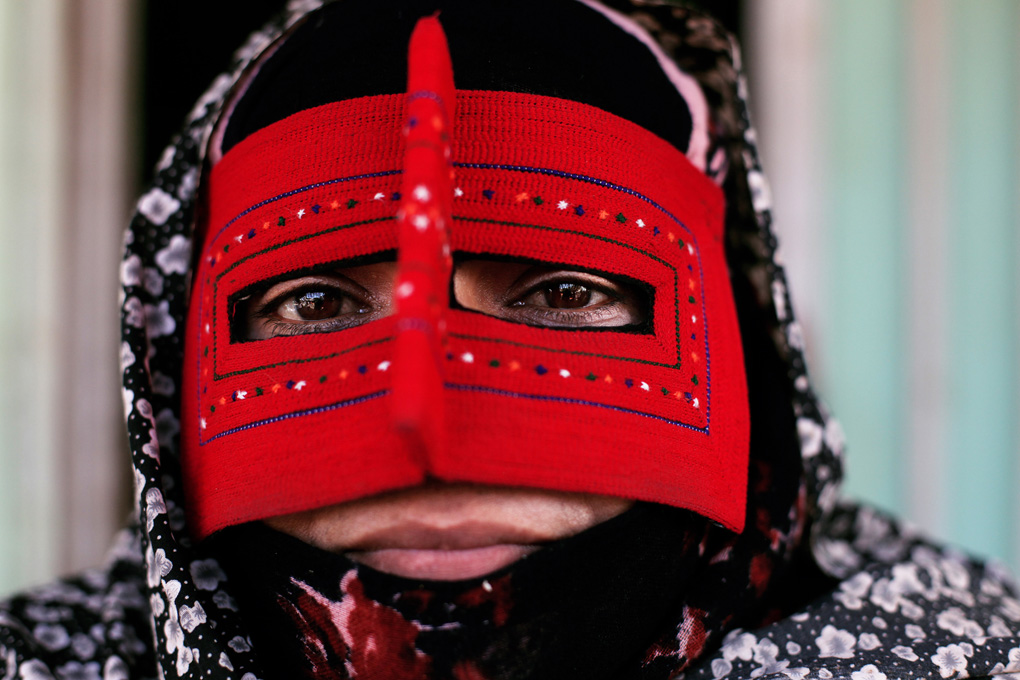 Kares returned to France with so many images that publishing a book seemed indisputable. He then discovered the struggles of publishing houses. To make things easier, eh simply created his own, Amu Darya. This allowed him to be in control of everything. His training as a graphic designer allowed him to take charge of the visual identity of the project. 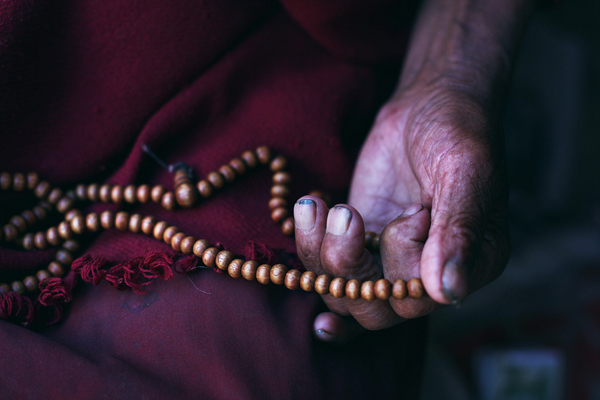 It took him 2 years to promote his book and to share what he has experienced. I remember seeing him at the first expo he organized upon his return. Kares told me that he had spent 2 years listening to others, and that now the situation was reversed, it was up to him to speak. 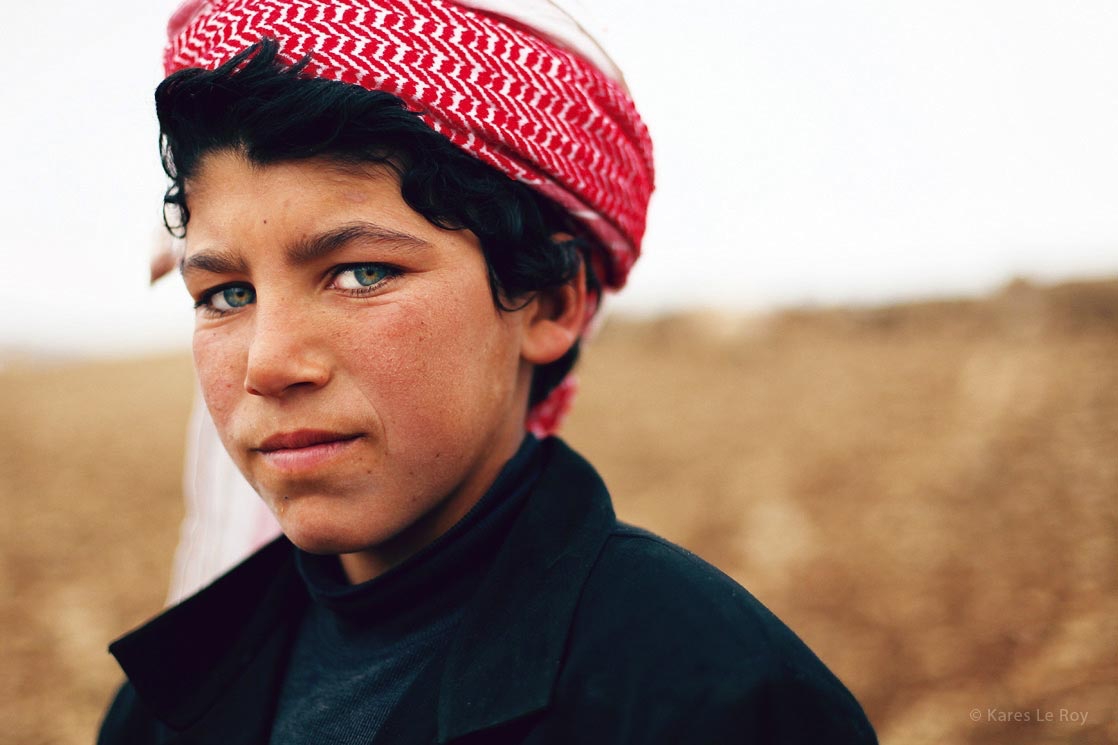 His approach when creating Ashayer was the complete opposite to that of 56,000 kilometers. This time, Kares Le Roy prepared his 16 months of travel, and he knew exactly what he wanted to photograph: the Persian nomadic tribes. What fascinates him about the nomads is their way of life, the simplicity of it. He drove to Central Asia in a van fitted with a bed. He even installed a printer in order to at least offerportrait to those who offer him their time. 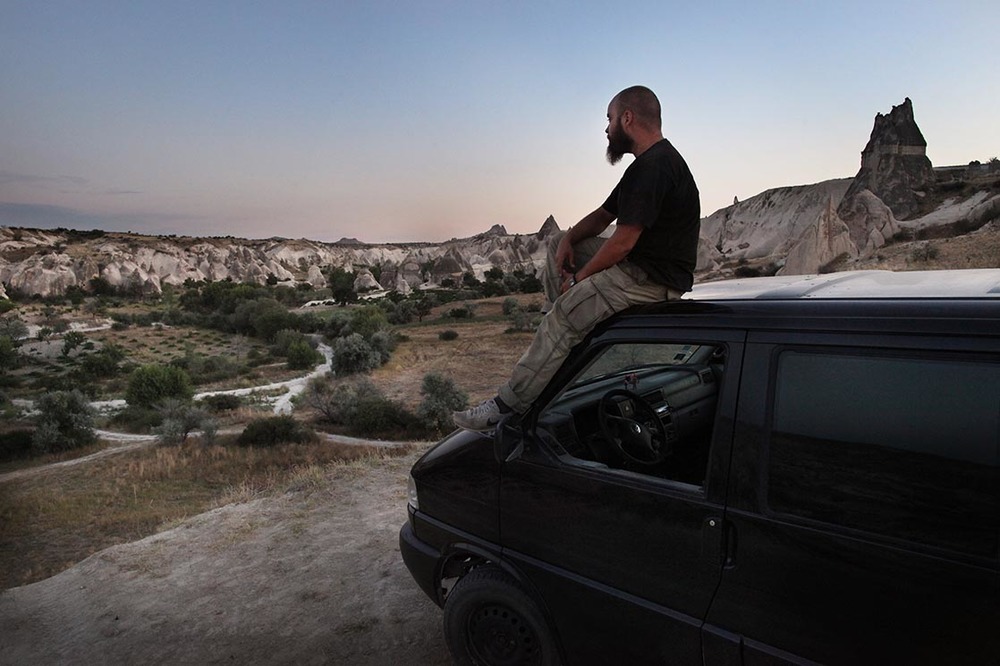 For Kares, “Iran is the most beautiful country”. His eyes soarkle when he talks about it. It is the cradle of civilization, rich in culture, poetry, and landscape. He likes the hospitality, the language, the food. Everything is fascinating in Iran, even that which seems hard. He travels through countries that have a strong Persian identity such as Tajikistan or Afghanistan. 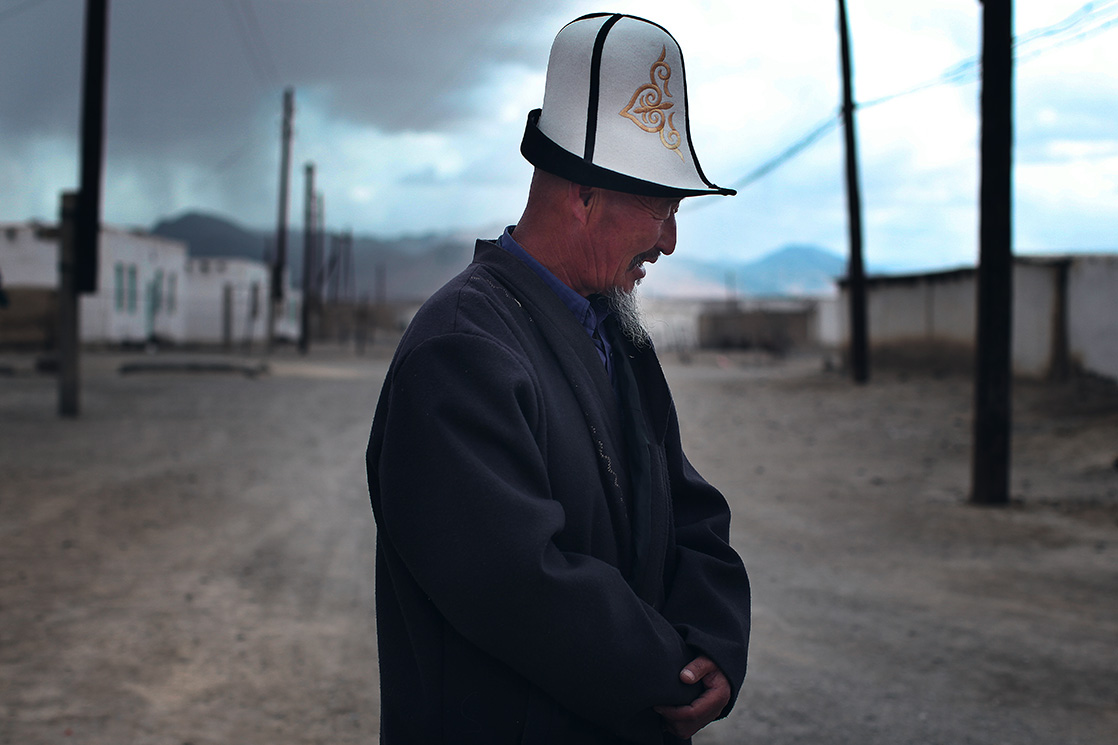 But this trip did not come without risks. Winters can be very harsh in Central Asia. One evening it is -11 ° C inside the van, and -27 ° C outside. He saw his glass of water turn to ice. The next morning, he took refuge in Bishkek, the capital of Kyrgyzstan, to wait for warmer weather. 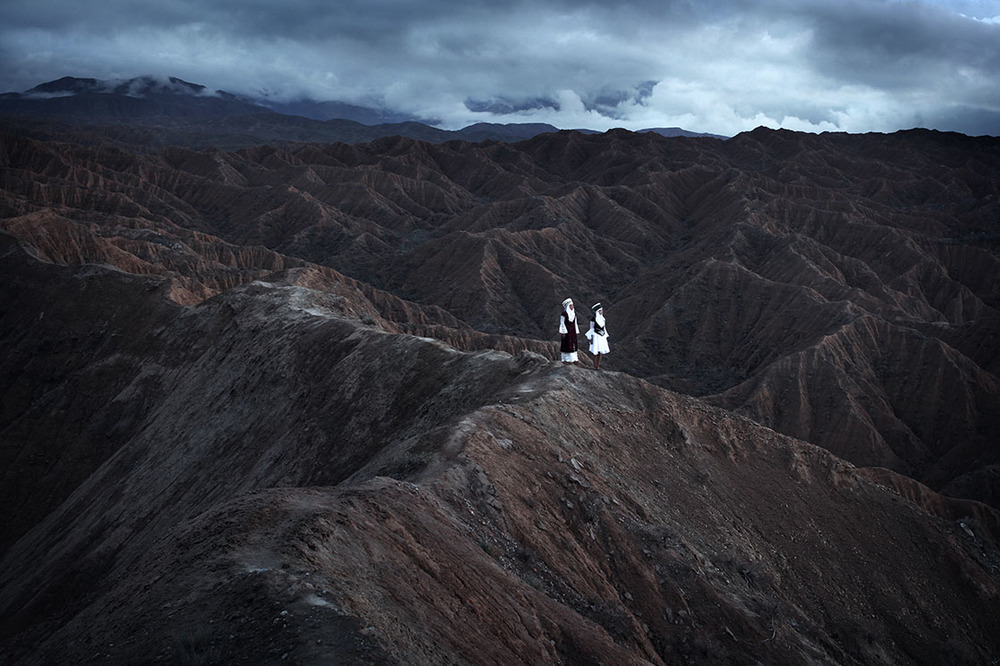 The welcome Kares receives from the nomadic tribes can be complicated sometimes because they do not understand our civilization. He needs to be accompanied by a translator or a fixer from the same tribe, who are not easy to find. Once he is on his way, members of the tribe can see him arriving from a distance. They look at him and observe him. It takes several weeks before he can approach them. A few families are more closed-off than others, and he understands this. It’s not always easy to let a stranger who does not speak your language go into your house to photograph you. It is a human reaction after all. 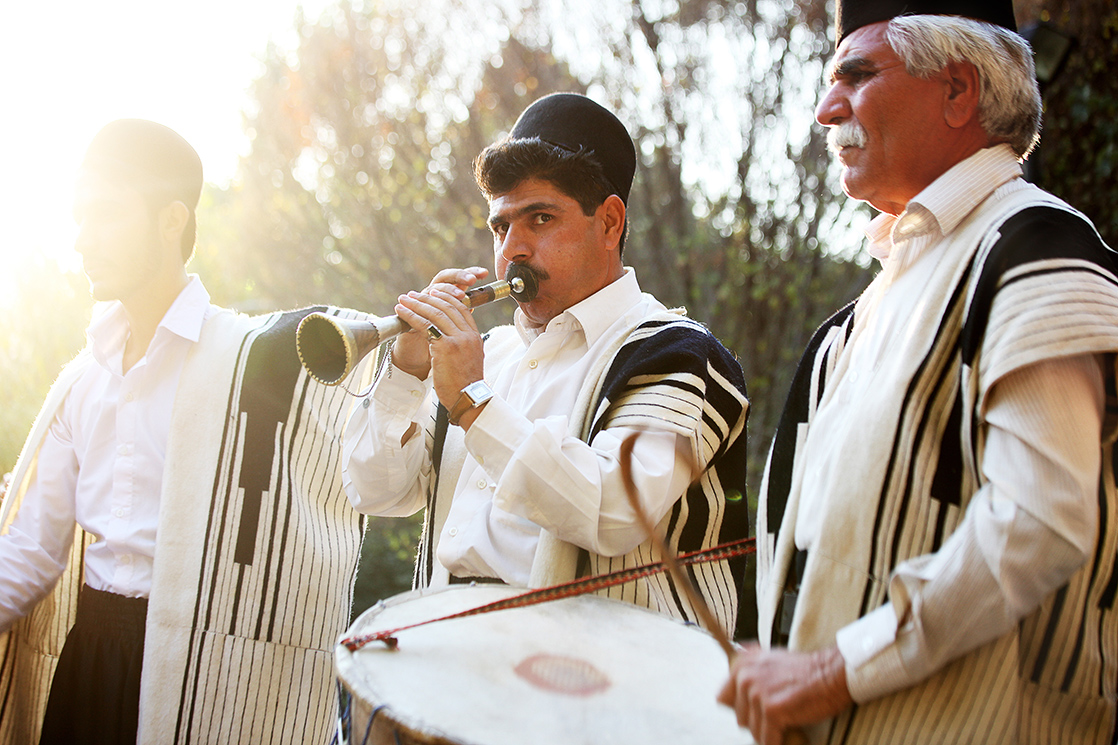 During this trip, Kares Le Roy ended up spending more time writing than photographing. He took notes of ideas he came up with, or he wrote press articles that have been published in travel or photography magazines. And he prepared Ashayer. 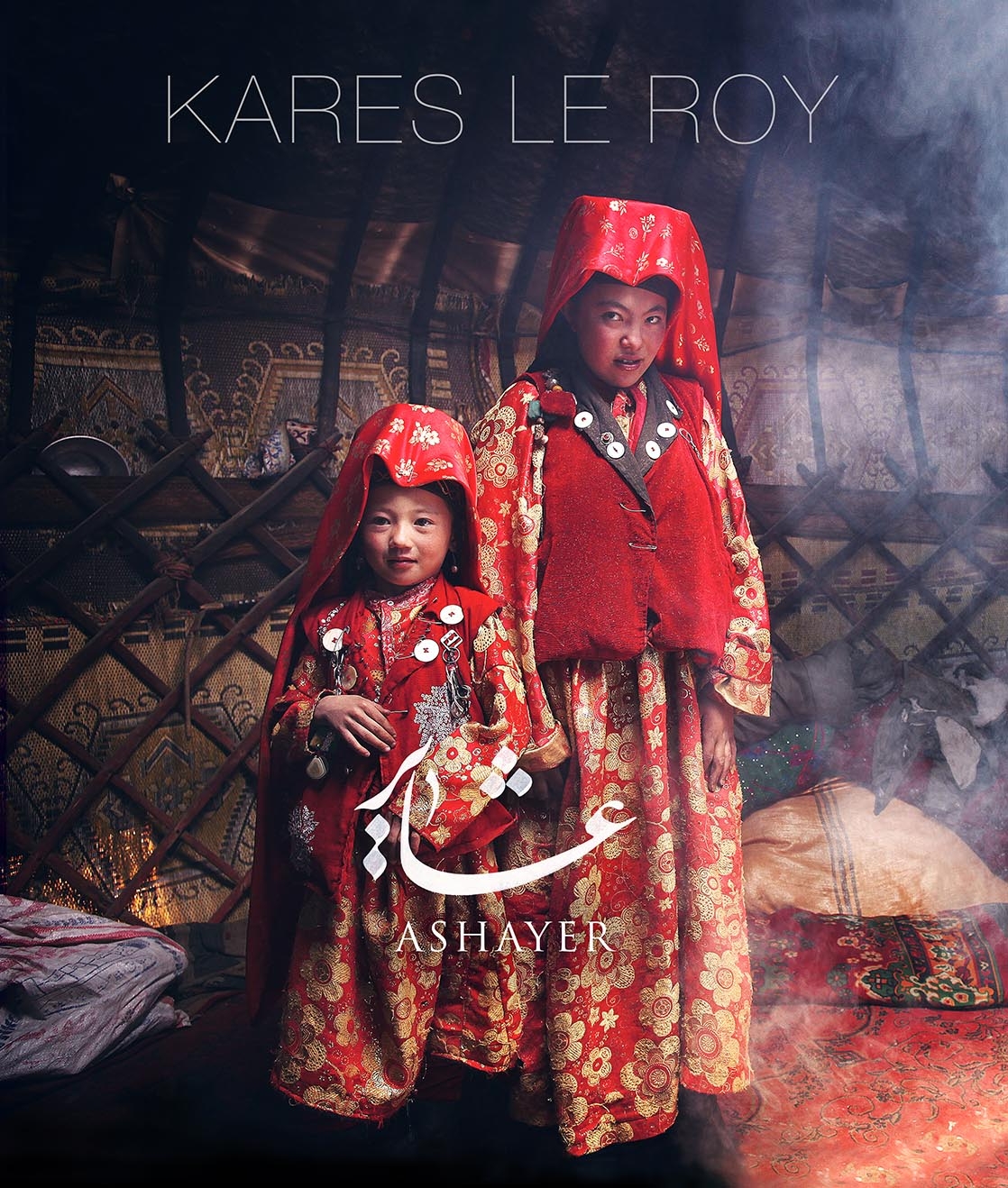 As a photographer, Kares is delighted with his exposure. As an entrepreneur, it is less so. He always felt he could have done better. Especially as his travels come with substantial costs. He dreams of making a film, but for that he would have to find a sponsor. 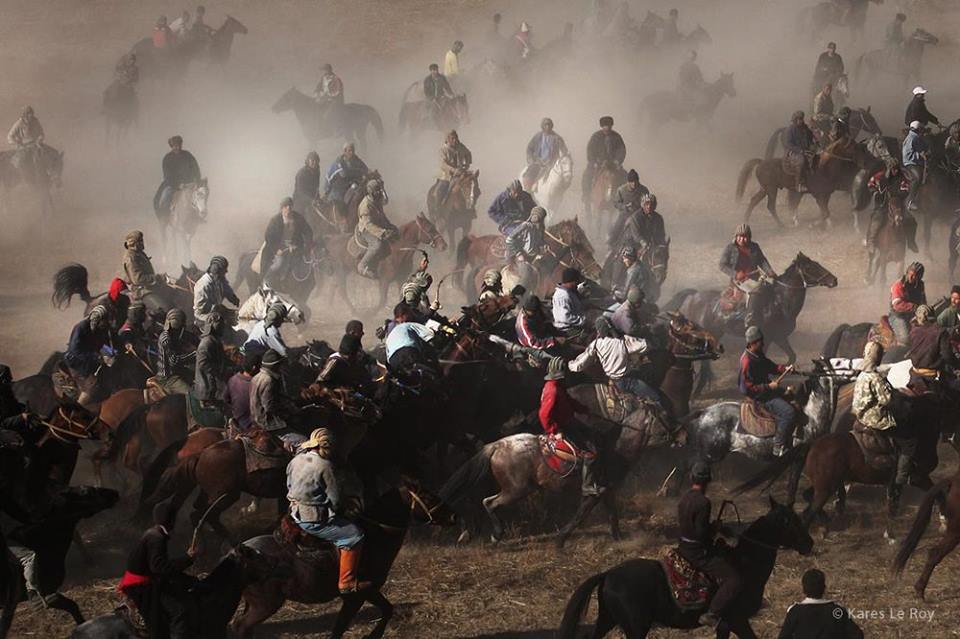 Among his worst memories of traveling, he recalls the two weeks he spent riding horses to join the Tsaatans, a Mongolian tribe, because he hates horse riding. Or even a trip to Turkey during which he was arrested by the police who took him for a French terrorist working for ISIS.

Among his best memories are Lake Pokhara in Nepal, or the city of Yazd in Iran, one of the oldest cities in the world. He also remembers a Christmas spent with a family in Iran, who tried to organize a Christmas Eve to honor his presence, although he was not a Christian and had not asked for anything. 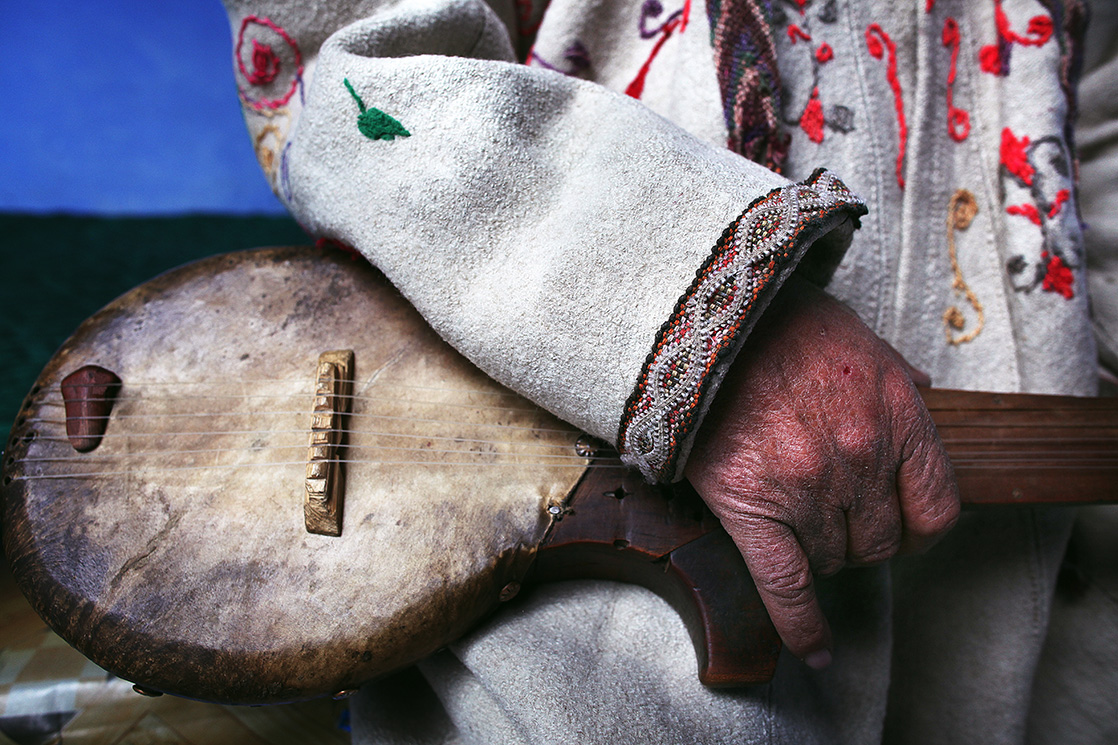 Despite all the cultures he has discovered, he does not feel like being one of them, he is aware that he does not come from there. But he saw men living alone in a cabin in the middle of nowhere, and that makes him dream. Later, Kares imagines himself also living isolated in a hut or a yurt in the mountains or near the Arcachon bay. Because even if traveling is his passion, he loves France. In fact, the more he travels, the more he loves France.

The irony of Kares’ life is that, in wanting to give a voice to the forgotten, he is often in contact with them, while leading a life of loner. It’s simpler to be alone. This allows him to stay somewhere to observe people for as long as it takes, without any constraints, without ever thinking about time. He is a loner who dedicates his life to others.

I would say that Kares Le Roy is a generous humanist. Humanist because through the portraits he makes in the most remote parts of Asia, I get the impression that he is looking for what is most original in humans, that which is most authentic, which has not been influenced by our modern societies.

And generous because the portraits he makes are not for him, but for everyone, both for the forgotten, to give them a voice, and at the same time for us, spectators delighted to discover the beauties of the Orient. Besides, he is so generous that it is essential for him to return the favor. For example, after making 56,000 kilometers, he organized a fund-raiser to help the Nepalese grandmother who made the cover of the book, and he wanted to hand over the donation, plus a copy of the book in person. He did the same for Ashayer and portraits of the eagle hunters. These portraits have been published extensively in the press. It was important for him to bring them these publications. 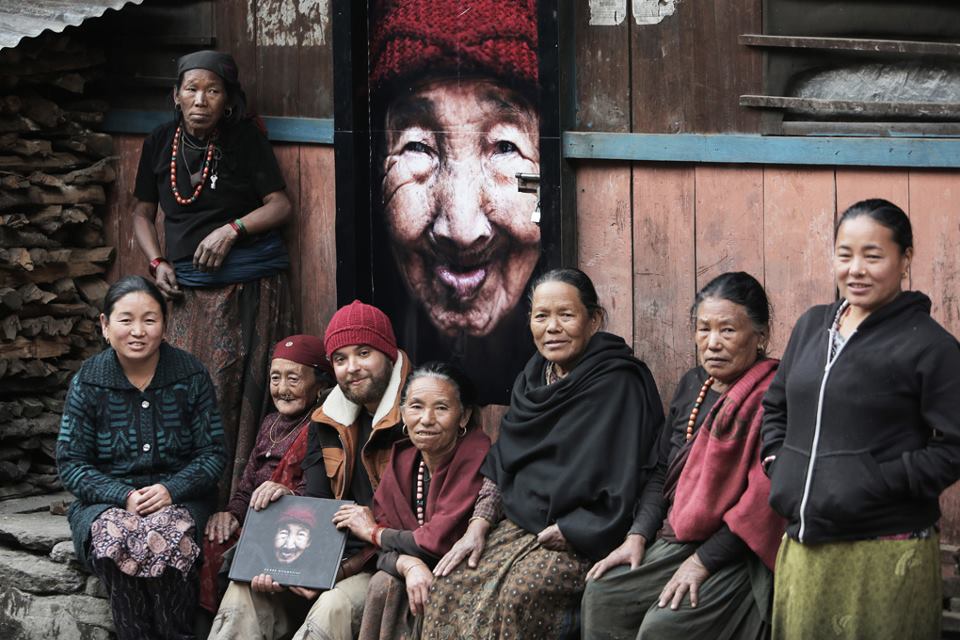 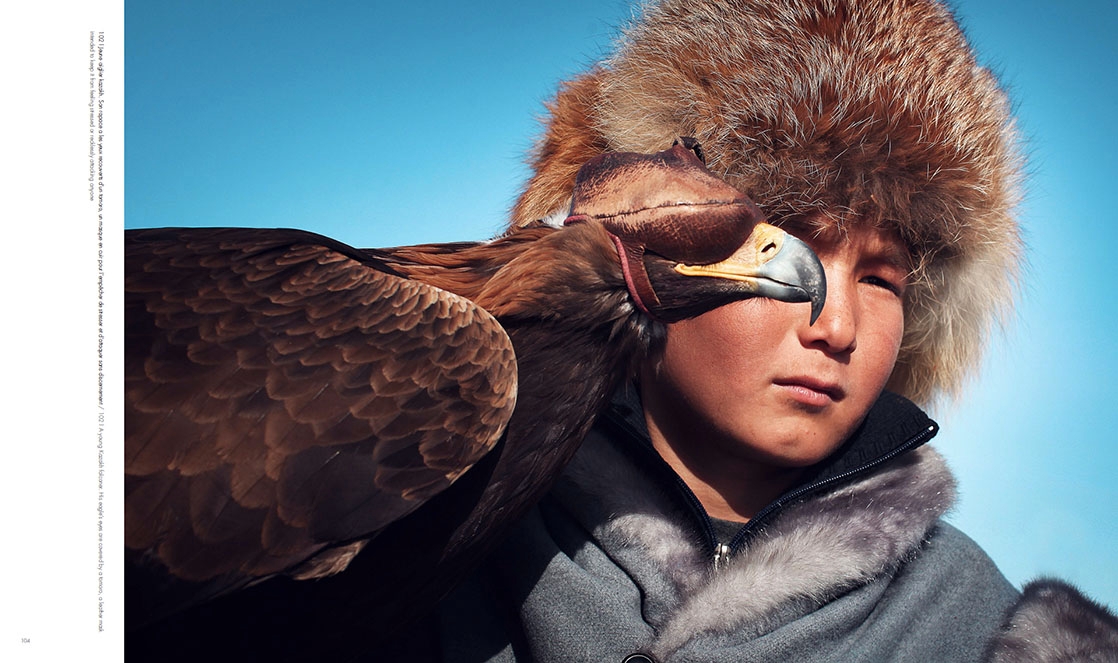 For me Kares Le Roy is a bit like a modern Levi-Strauss with a camera in place of words. In addition, his pictures are sublime. I loved 56,000 kilometers because it is one of the rare travel books that allows you to discover all the aspects of a region of the world, that is to say the people who populate it, as well as the monuments or the landscapes which decorate it. And Ashayer is a bit like a duty of memory so as not to forget the cradle of Persian civilization. 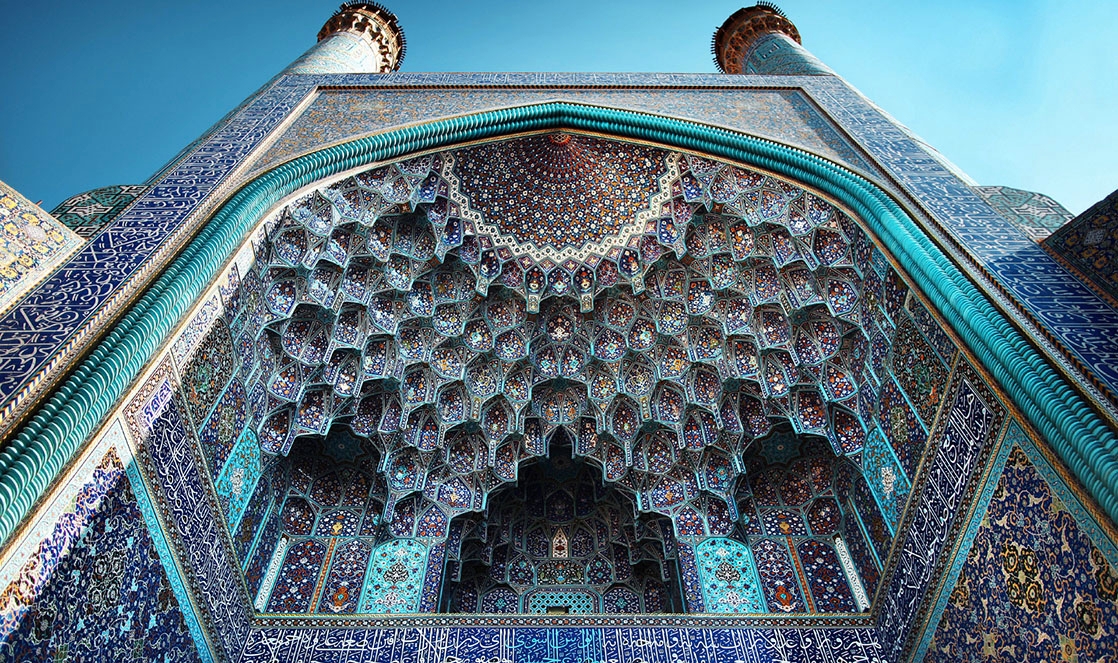 One Reply to “Kares Le Roy”