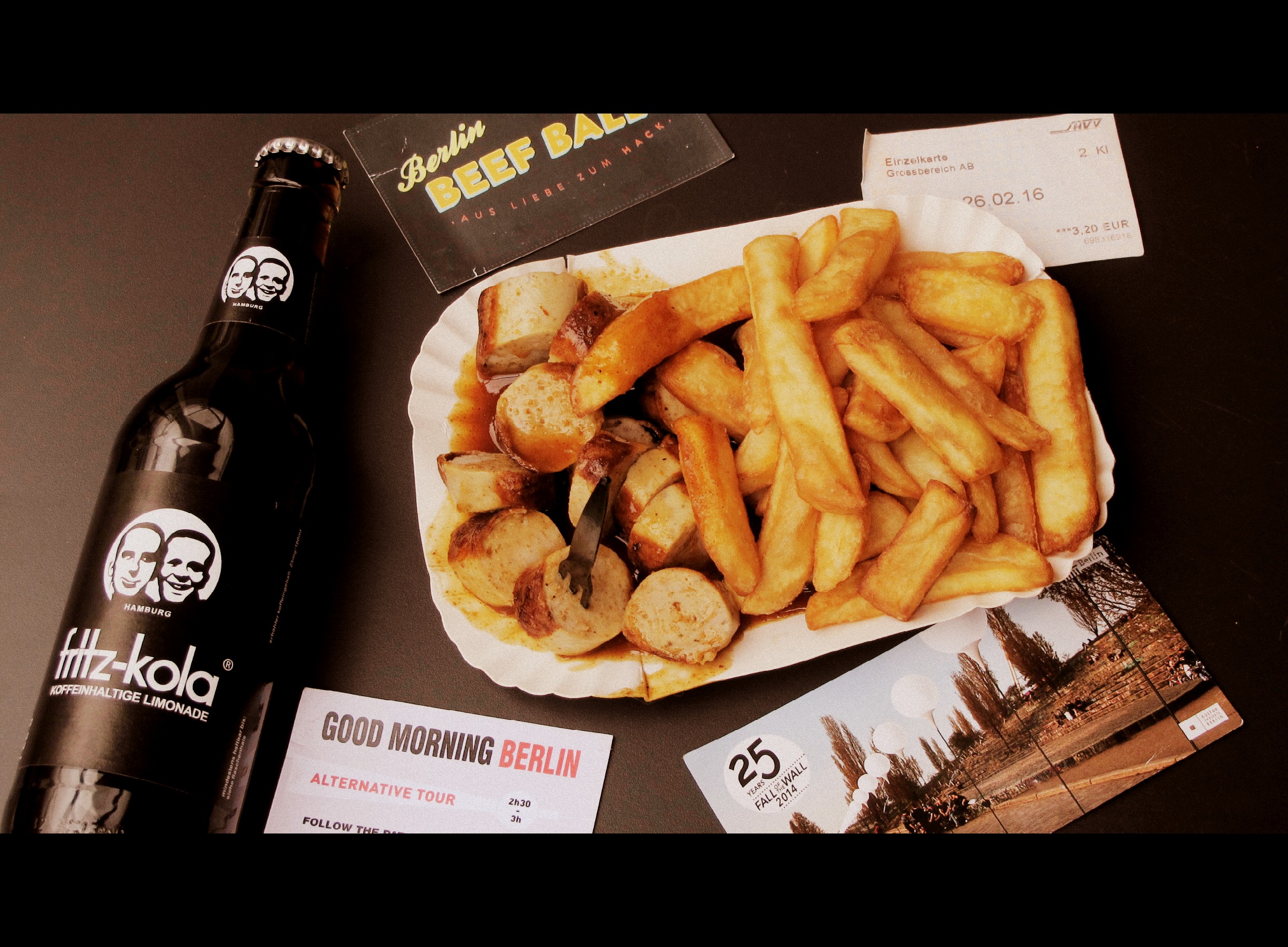 Top 5 of cool things to do in Berlin

Here is my top 5 of cool things to do in Berlin.

Berlin, the new paradise for artists, is the favorite place for people under 30 to party for the weekend. They can enjoy the open-airs during the summer or even to move there permanently and try out the bohemian lifestyle.

In my case, I had been to Berlin a few times to party. Then I found love there, as a result of which the frequency of my visits began to increase and ended up with me moving there for a few months. Therefore, I have had the time to visit the capital of electronic music. As well as visiting various nightclubs, I also visited the touristic and historic sites. I took the time to discover some other cool things that this city had to offer.

You can already find very comprehensive websites which deal with all kinds of practical issues for going there on vacation or even moving to Berlin. So I’m not going to waste my or your time by regurgitating all that information. Instead, I will share with you my top 5 of cool alternatives  thing to do in Berlin, for those people who don’t have the energy to go clubbing.

It’s not surprising that I include the Mauerpark in my Top 5 about Berlin. You will also find it in every guide, either for its historic significance or its entertainment. The name of the park, which means “park of the wall” is in reference to the Berlin wall that was constructed there in 1961 between the areas of Prenzlauer Berg and Wedding. You can even still see some of the remains. This is one of the few big parks in the area, so on sunny days you can find numerous ways to entertain yourself, whether its concerts, flea markets (don’t expect to find great treasures there), and of course, a giant karaoke.

The karaoke takes place in the middle of the park every Sunday when the weather is nice. Bear in mind that for Germans, when it 8°C outside and it’s not raining, this is considered nice weather. It’s really worth a visit. Everybody who want to can sing, and you will see all kinds of people grabbing the mic and getting : children, the young, the old, parents, grandparents, Germans or tourists. There is also a very good spirit in the audience. Everyone is encouraging those who dare to perform. And they won’t hesitate to laugh when a young guy, coming straight out of a night club, takes off his clothes, only to reveal a flamenco dress he was wearing underneath, and starts singing the Macarena.

Once you’ve had your dose of karaoke, you can take a stroll through the park. You will find other sources of entertainment, whether it’s a band playing music, a capoeira demonstration, or a guy in a horse mask playing guitar. 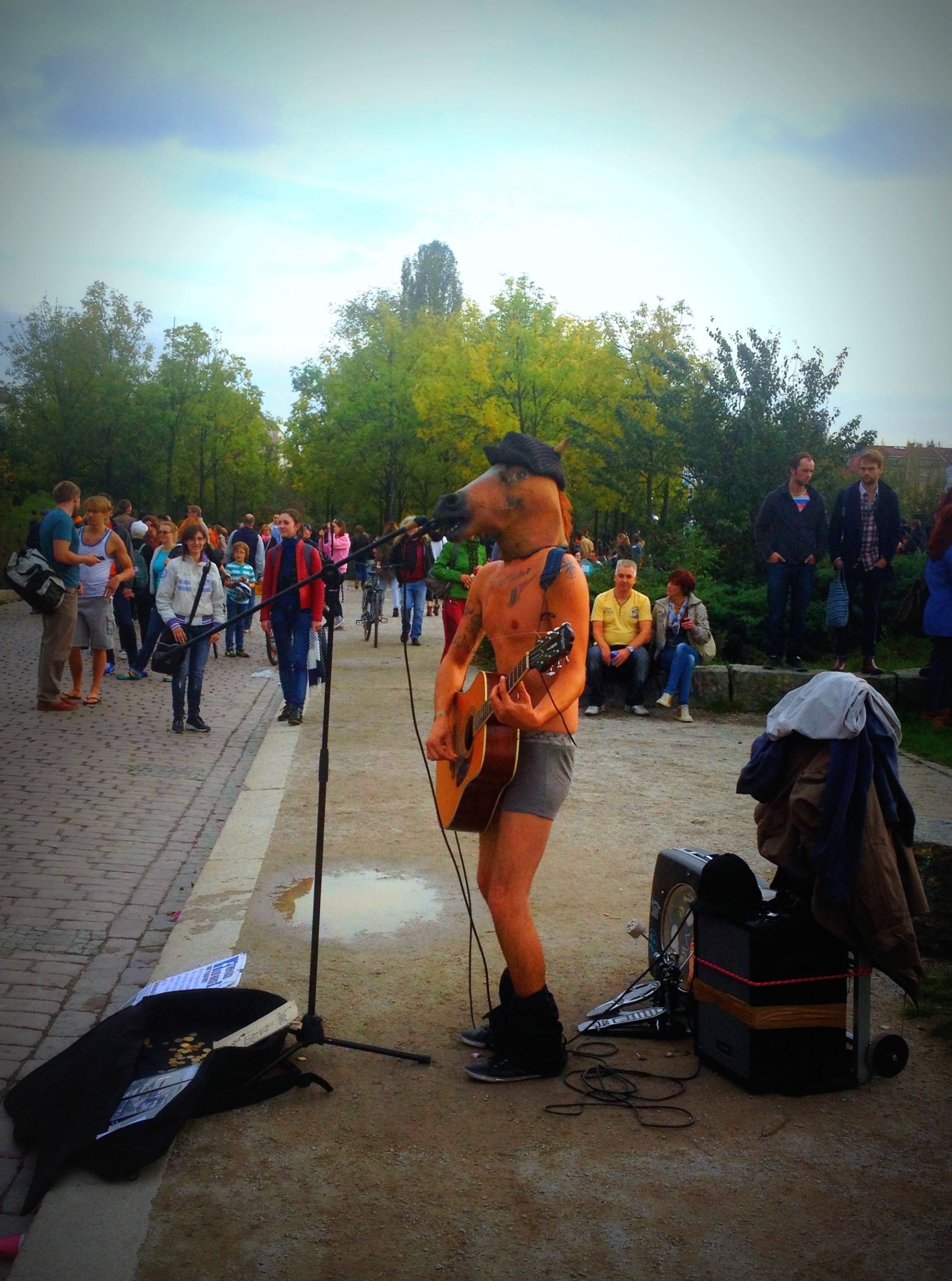 The Berlin Bunker is a real anti-aircraft bunker built by the Nazis during the Second World War. Due to its solid structure, rather than attempting to destroy it, the building has been put to better use. After the Nazis were defeated the bunker served as a Soviet prison before becoming a warehouse for fruits and vegetables. In the 1990’s it became one of Berlin’s first hardcore techno clubs (often seen as the ancestor to Berghain). And since 2003 it’s an art gallery.

This was the crazy idea of a wealthy polish art collector, Christian Boros, who even constructed his own private penthouse on the roof of the bunker. It is worth mentioning that in order to visit the bunker, you need to book an appointment in advance. While this may sound a little frustrating due to the fact that you have to plan this quite a few weeks in advance, in the end it’s totally worth it. You will be accompanied by a guide who will explain the various art works (of which there are many). This is also necessary, because, as is often the case with contemporary art, it can be very difficult to understand the meaning behind a piece without the help of a professional. So don’t worry if you’re not an art expert.

Of course there are numerous other art galleries to see in Berlin. Everything there is being turned into a gallery or a night club. But it’s cool to walk through the bunker, looking at art, while trying to imagine the nights that took place in those same rooms during the 90’s. 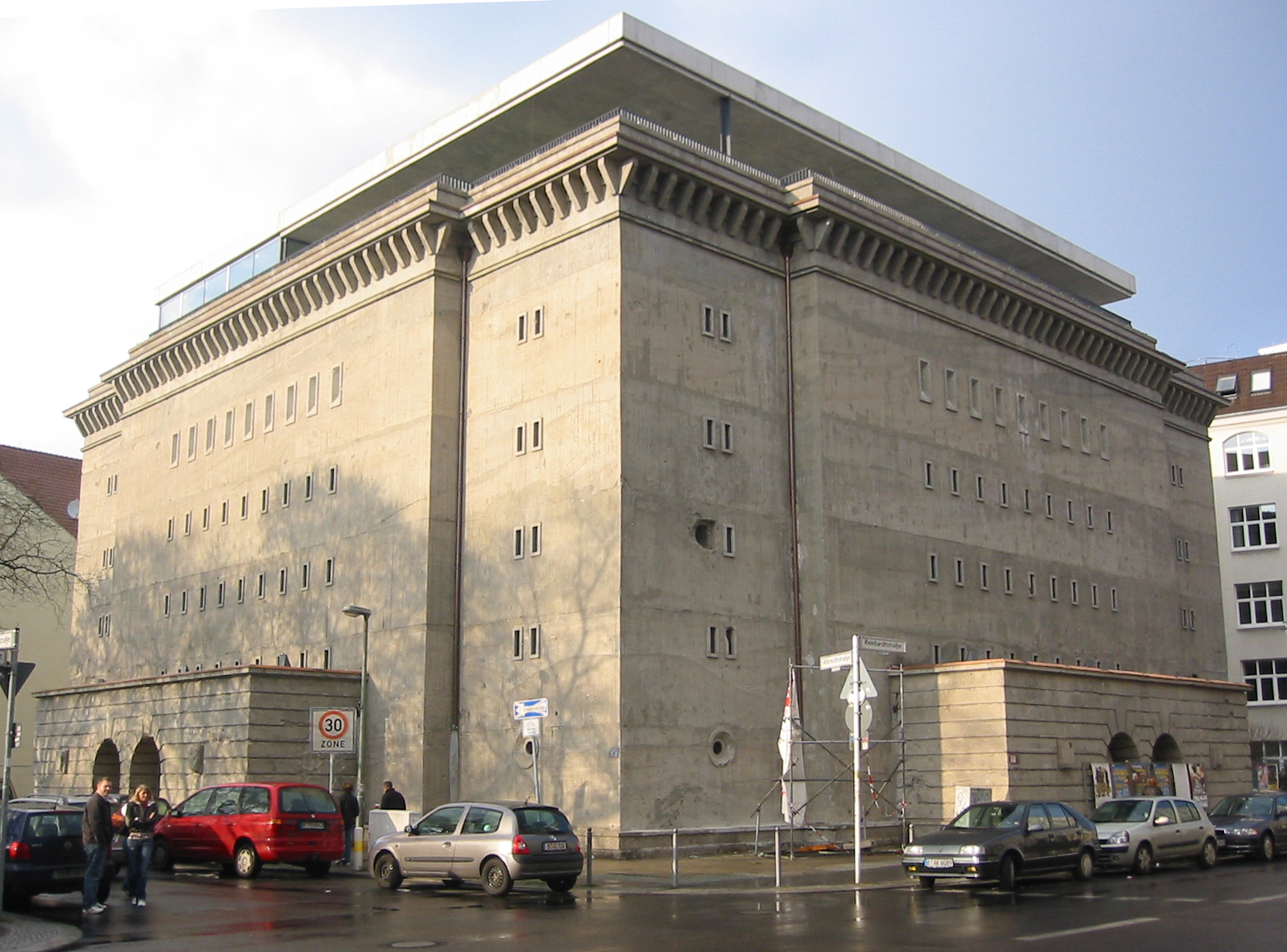 The Berlin Philharmonie is a venue combining two concert halls. It is also the home of the Berlin Philharmonic orchestra. It’s a modern building that dates back 60 years, not exactly beautiful (it’s Berlin…) but it is conceptual. Of course they offer an extensive program of classical concerts, jazz and more, but a particularly nice feature of the Philharmonie are the lunch breaks on Tuesdays.

What I’m going to share with you is going to please my French readers. Every Tuesday at 13:00, there is a free classical concert open to the public at the Philharmonie. The style of the room fits to that of the whole building, meaning that there is no real structure and limited seating. I would advise you to get there around 12:30, if you don’t want to end up standing in a corner from where you can’t see a thing. You can bring your own sandwich or buy a sausage at the entrance. I would also suggest to bring a small cushion, as you might end up with a seat on the stairs made from concrete and not exactly the most comfortable in the world. The concert lasts about 45 minutes and the program changes weekly.

It’s definitely worth a visit. Let’s not forget music has charms to soothe a savage breast. It certainly won’t harm you after an intense weekend.

And more music! In Berlin, you can easily find plenty of small clubs playing live jazz music for just a few euros. You can find a complete list of clubs on the website www.jazzclubsinberlin.com. The club which I can highly recommend is Das Edelweiss in Görlitzer Park. If you’re visiting Berlin, or if you just moved there, there’s a good chance that you will end up around Kreuzberg or Neuköln, and hence not far from Görlitzer Park. And if you don’t yet know Görlitzer Park, this is a great chance to get to know it. It is here that you will find many of Berlin’s hipsters hanging out.

The jazz club is situated at the entrance of the park when you arrive with the subway. Enter the park and walk about 50 meters to find the club. The jam session takes place in the room upstairs. Entrance is 3 Euros, and starts at 22:00. I would advise you to arrive there a bit in advance if you want to get a good seat, because the place fills up very quickly. During the first hour, there’s a band playing a jazz concert. Its quickly obvious that most of the musicians come from the US, and that they are true lovers of the genre. This is an opportunity for them to have fun doing what they love. It’s a joy to watch and listen to. During the second part of the evening, amateur musicians are invited to come up on stage. This is why you will see many guys sitting in the audience, waiting eagerly with their saxophones. The overall atmosphere is really cool. The idea of transforming a concert into a jam sessions ensures that no two concerts will be the same.

So, if you like music and would like to hear something a bit more melodious than electronic music, this is where you should go! 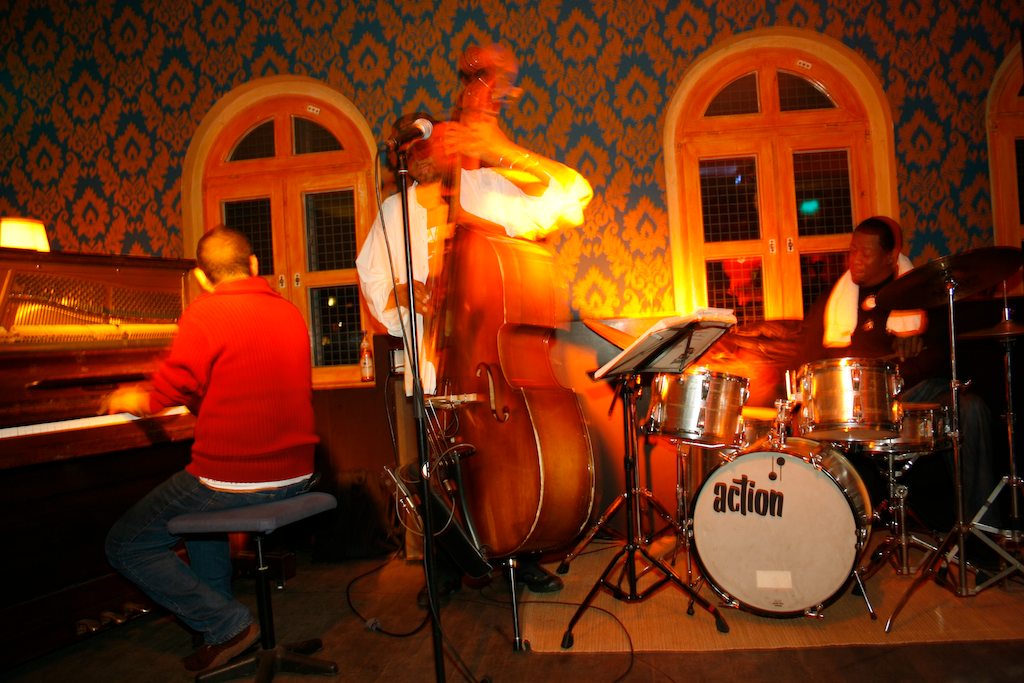 I end my Top 5 in Berlin with a complete moment of relaxation. The liquidrom is a spa unlike any other. It combines relaxation and modernity. The design of the building is very futuristic and for once it’s pleasant to look at. You can find the usual relaxation areas, like hammam, saunas, Jacuzzis etc. So far, nothing incredible. What makes this place special, however, is a room called the “Liquidrom Pool”.

The Liquidrom Pool is a large swimming pool under a dome. The water is warm and salty, allowing you to float like you’re on clouds. There is a light show to help you relax, called light therapy. Special speaker installations allow you to hear the music even when your head is under water. So in the evenings you can even enjoy live DJ sets. It’s best to spend half a day here, because the price is more interesting than if you only go for 2 hours. Four hours should be enough to enjoy all the facilities.

I don’t recommend the massages, as they are bad and very expensive. The spa is open from 9:00am to midnight, which is pretty cool, and on weekends it closes at  3:00am if they have a particular DJ performing. For me, the idea is really to relax and enjoy a quiet moment in a quirky place, so I would advise to go there during weekdays in the early afternoon to avoid the place being too crowded.

One extra bit of advice: if it’s your birthday, entrance is for free!

Voilà, you know what is my Top 5 of cool things to do in Berlin. If ever you try one of it, give me your feedback.

One Reply to “Top 5 Berlin”