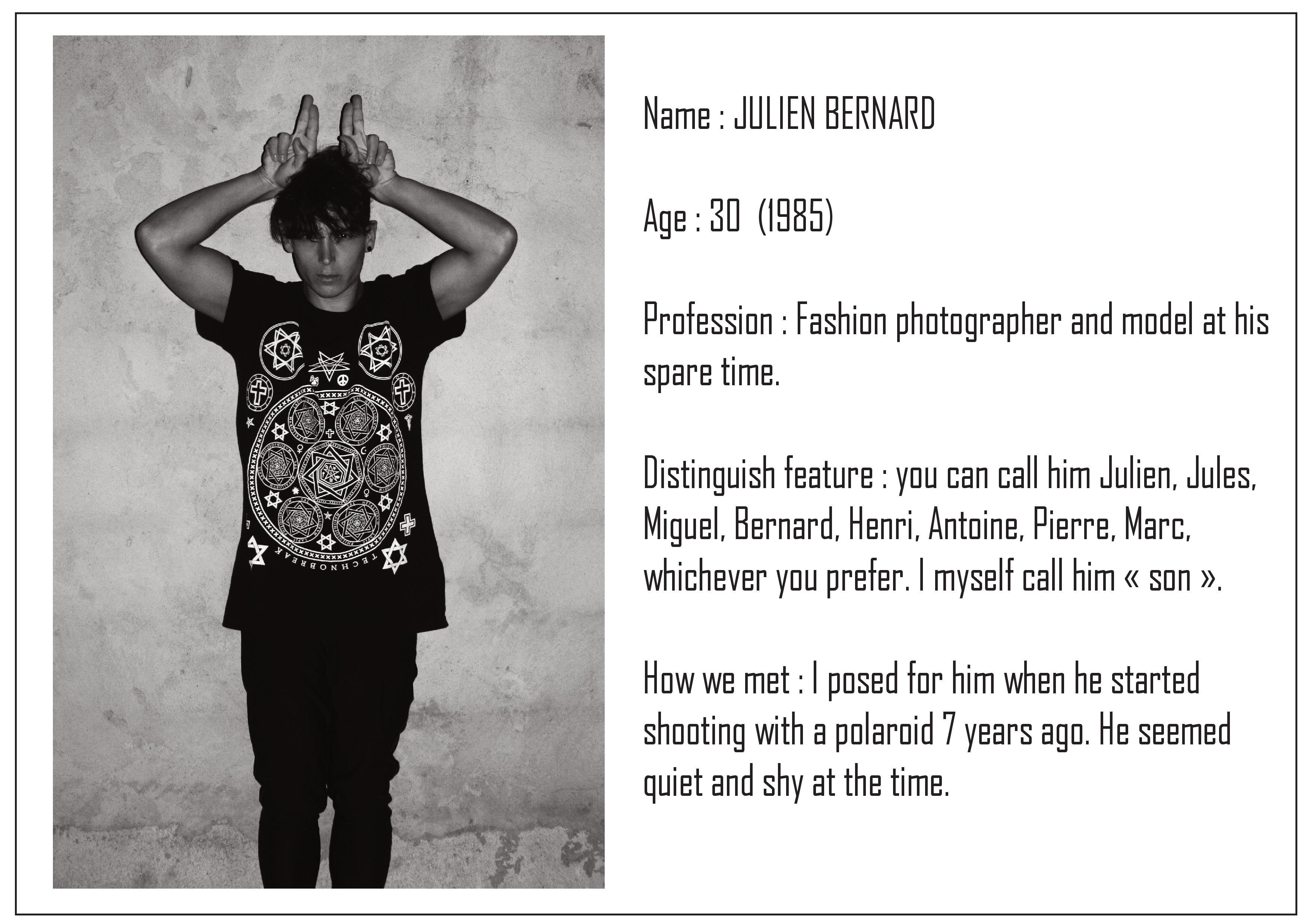 Who is Julien Bernard ?

As I set out on my adventure of writing a blog about artists, it seemed more than obvious that my first article would be dedicated to Julien Bernard! Just saying his name is enough to bring a smile to the faces of those who have once crossed his path.

Julien Bernard is not only an artist, but also a colorful character! Hyperactive, athletic, with an almost omnipresent smile, a bottle of wine always within reach, and his unusual outfits, he easily stands out as the most sociable guy at every party. Everyone loves him. In everything he does, creates or produces, there is an artistic approach, purpose, and structure. He has many things to express ! Just a look at how he constantly transforms his parisian 17m² apartment or how he dresses himself is enough to understand the phenomenon. And all of it started at a young age. When he was about 8 years old, Julien spent the summer imagining his fantastic new outfit with which he would impress all the guys and girls at the start of the new school year : a red, white and blue USA Champions tracksuit, exclusive Nike trainers from the United States, and small, round, blue sunglasses. And he got his outfit !

Until this day, his outfits are sacred. Julien is most certainly not a “fashion victim” and cares little about current trends. With him, every outfit is thoughtfully put together; this top goes with this bottom, and nothing else. This old, worn-out jacket, which others would have thrown away a long time ago, fits perfectly with a specific shirt (a floral one I suppose), so as long as the shirt is there, so will the old jacket. 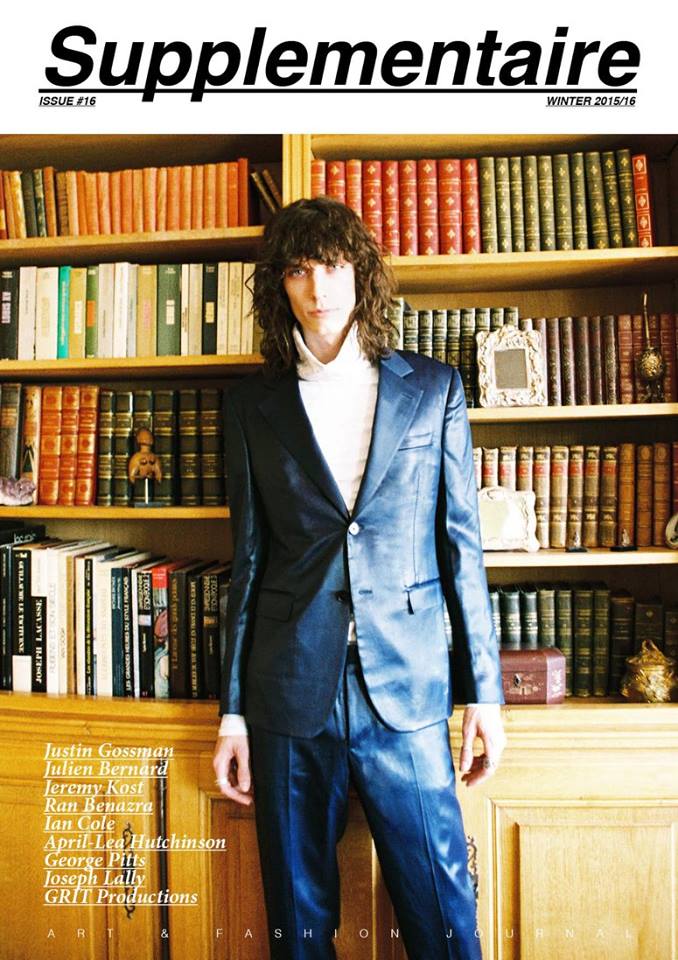 Julien Bernard was never particularly bothered about his future. One could say he was content with having fun. As a kid, he wanted to be a carpenter like his dad. So the school in his little village of Sologne was, simply a place for him to entertain his friends. As an adult, he finally evolved in hip-hop dancing with his friends, he was giving classes and he participated in competitions from Paris to Los Angeles.

Initially, the idea to start taking pictures of himself simply served the purpose of observing his posture during dance routines, and soon Julien found himself posing for fashion shoots. Becoming a model had never crossed his mind, but hey, he was enjoying it, so why not? He moved to Paris, but would travel back home on a weekly basis to teach his class and see his family. But after 4-5 years of being a dance teacher, he felt like he needed a new challenge. He devoted himself to the parisien life.

Quickly, he found himself with a polaroid in his hands. It’s at this moment that we met. His surname as a photographer was “Jules Pouce”. However, he soon discovered that a Polaroid costs more than it brings in. He invested in a digital camera to start earning some money, but the pictures looked too much like a commercial catalogue and he didn’t like it. Finally, he settled for analog photography, which he feels is more authentic, raw and intense. And so began his career as a fashion photographer. 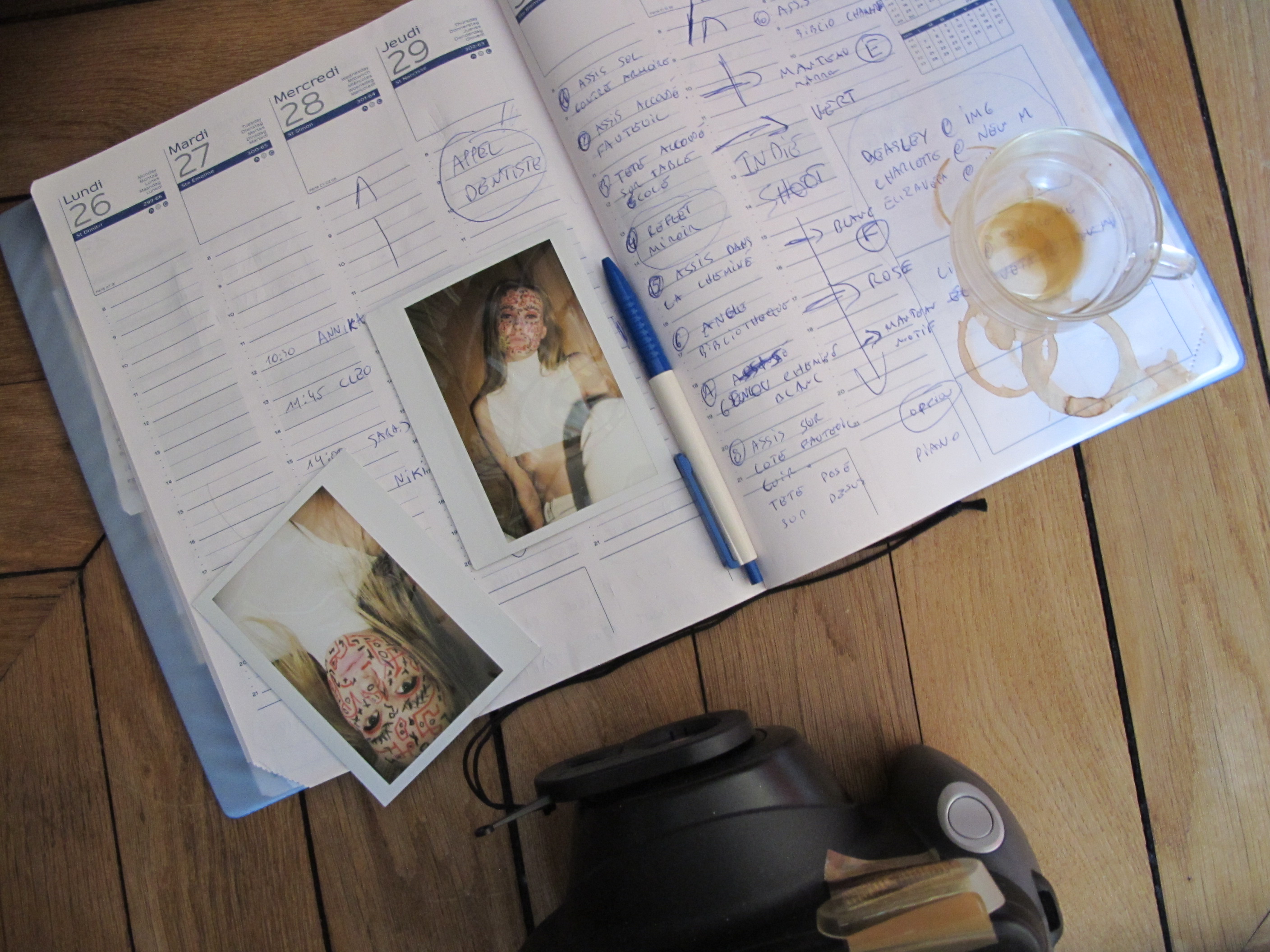 One of Julien’s main sources of inspiration is cartoons, especially those of the 80’s. He loves the aesthetics, the shapes, and the colors. Every day, when he is at home, he eat breakfasts watching cartoons, he goes to sleep watching cartoons, and if he wakes up in the middle of the night, he will watch another cartoon. He has even reached the stage where he dreams in cartoons. In fact, his favorite dream involves his best friend being attacked by giant weasels in a South Park episode.

However, despite having enrolled in drawing classes, Julien Bernard is not very good at it, so he captures the aesthetics through photography. This is why he loves working with craggy, natural and atypical faces. That which is to stylish or smooth bores him. If the characters from “High School ! Kimengumi” were real, he would love to take their picture. He marvels at his boules teammates who have an untypical face, but also in front of a broken mirror on the sidewalk.

One can easily compares his images to those of Nan Goldin, the American photographer whose work is focused mainly on parties, drugs, drag queens and marginalized groups of all kinds. He likes the works of Guy Bourdin because of the naturality and originality of his work, combined with a certain sexual aspect. He adores Picasso and Dali and believes that “even if they would exist 100 years from now, they would still be ahead of their time”.

When it comes to music, his favorites include Jacques Brel, George Brassens and especially hip-hop and rap, since he grew up with these genres. Hence, when he was asked to do a photoshoot with Oxmo Puccino for Modzik Magazine, his heart was pounding with excitement, “like when you fall in love”. After all, Oxmo is the greatest. He even has a portrait of the rapper hanging on his wall. The music of Oxmo has always been a part of his life, so when he finally got to meet him for the first time, he had the strange feeling that he already knew him. 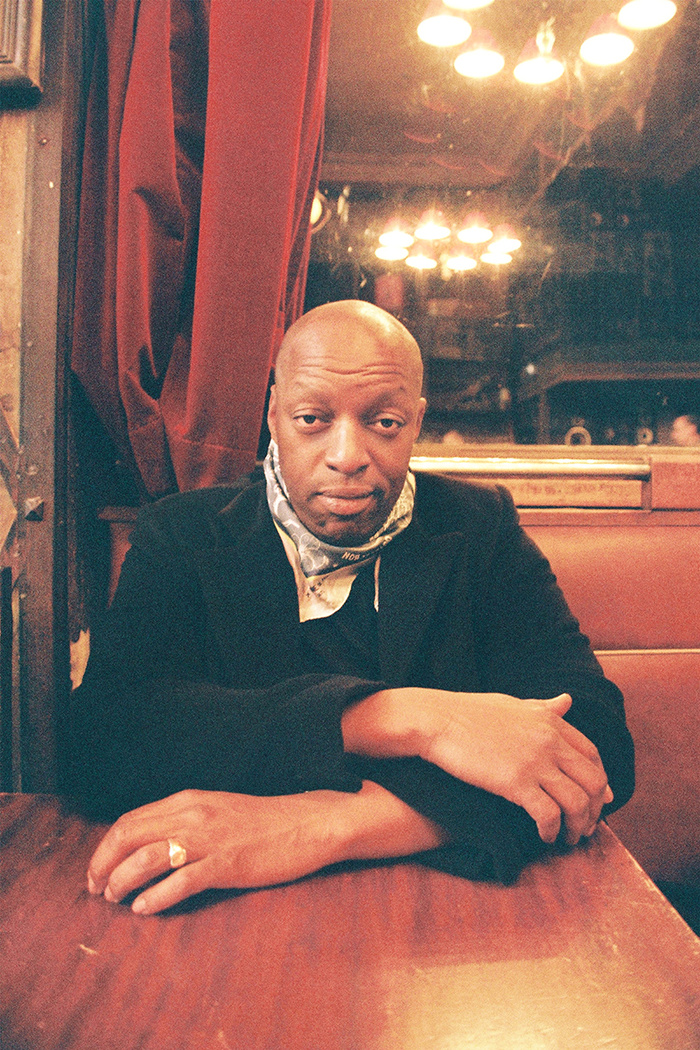 There’s no other photographic project that can excite him so much. Currently he works mainly for English magazines, such as Teeth Magazine, Tank Magazine or Supplementaire Magazine. Julien Bernard strongly believes that one day he will do some jobs across the Atlantic, but there is no rush. He is a big fan of videos but finds them too technical and doesn’t have the motivation to learn. So he is currently practicing on instagram, trying to capture onto film the things that inspire him (don’t be scared if you follow him).

One of his main projects, apart from “being good to his family” is publishing a book about his work, which won’t be sponsored by a brand or magazine to give him more artistic freedom. He will include both professional and personal photos. For the moment, Julien is not trying to force fate. He earns enough to live. He gets to work on projects he likes, and is currently enjoying himself making scribble portraits of models as part of a beauty series for Indie Magazine.

Julien is also able to live without constraints. He can continue to enjoy the Parisian night life and still has enough time for his two other passions: football and boule. Football includes two training sessions per week, as well as matches and drinks with the team. Boule takes place every afternoon, if the weather allows it. Despite his young age, he is actually a member of a boules club in his neighborhood. Of course he also has the perfect outfits to go with the game, including extremely short shorts which give onlookers a glimpse at his athletic physique. Personally, I believe that his presence has had quite an effect on the sex life of the other members of the team, as the wives love to accompany their husbands during the afternoon, not least to enjoy the view of their young teammate. 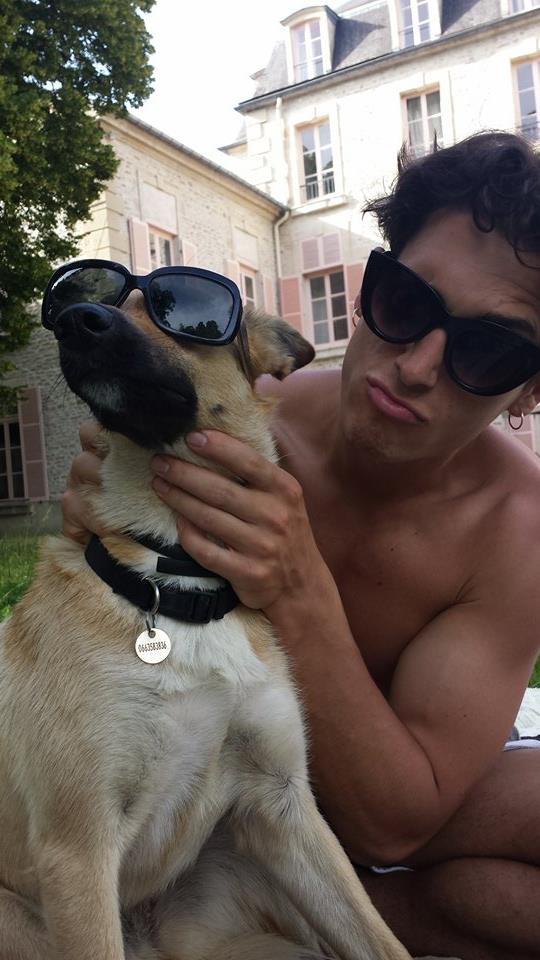 Julien Bernard is bubbling with creativity, like big child. He says that “Peter Pan follows him” but he is “organized”. His birthday gifts always contain elements of personalization, like a customized mug that will make you laugh every morning. There are people who have the ability to turn everything they touch into gold. Julien him has the ability to turn them into something “fun”, and always paired with great taste. I even remember one time when he turned an abandoned fridge into a shoe rack. If you ever invite him to a costume party, rest assured that he will try to have one of the best costume. This guy is the life of every party, always up for a good time, to light up the dance floor or to have a nightcap.

When I asked Julien if he considers himself as an artist, the question bothers him. He believes he is in no position to respond. However, at the end of the day, he believes that everyone who expresses themselves through some type of artistic medium is an artist. But let me assure you, Julien Bernard is an artist, with a capital A. He has the soul of a child, he is fascinated by the peculiarities of others, and it is the way in which he expresses himself through photos and other mediums that makes him fascinating. 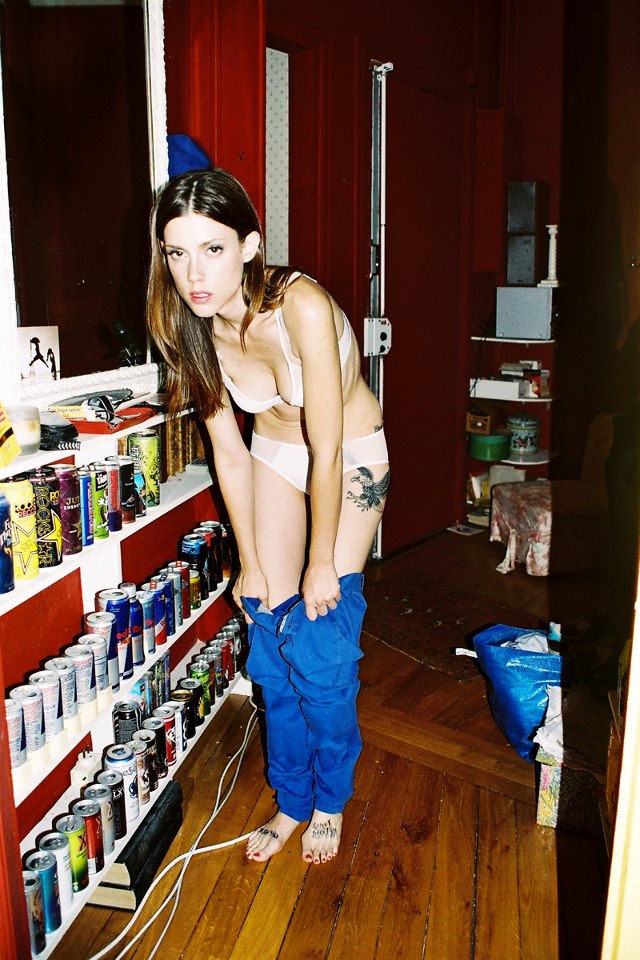 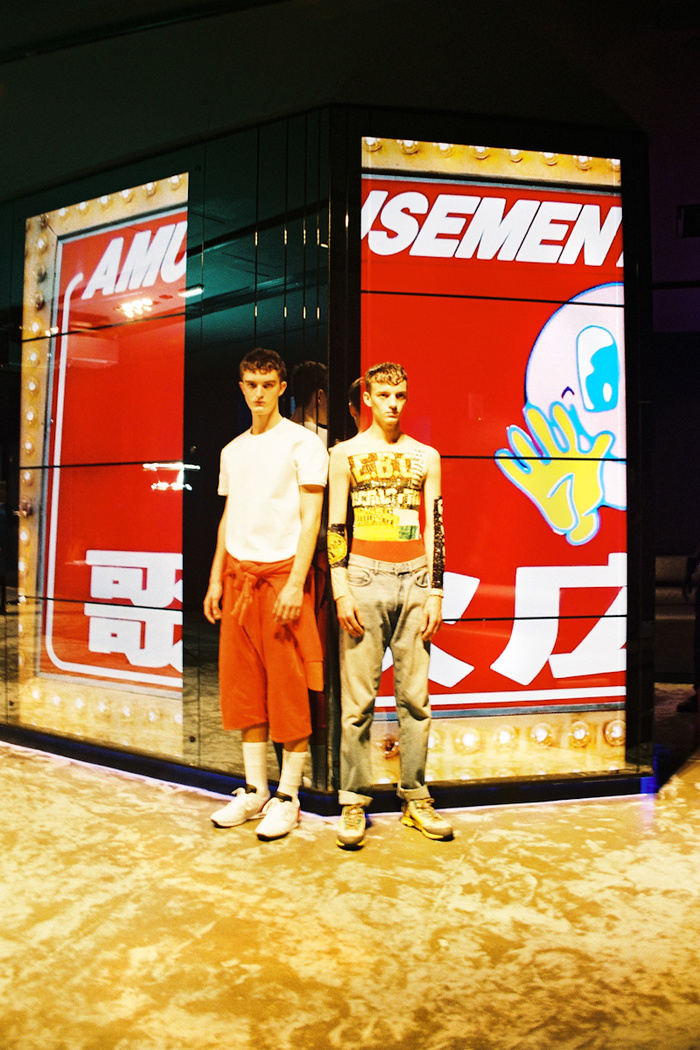 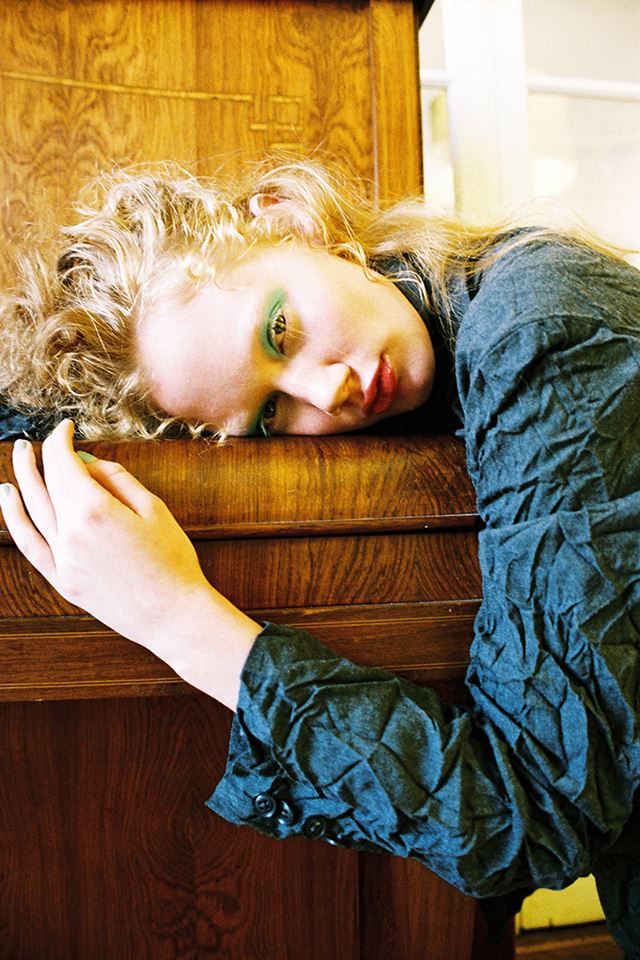 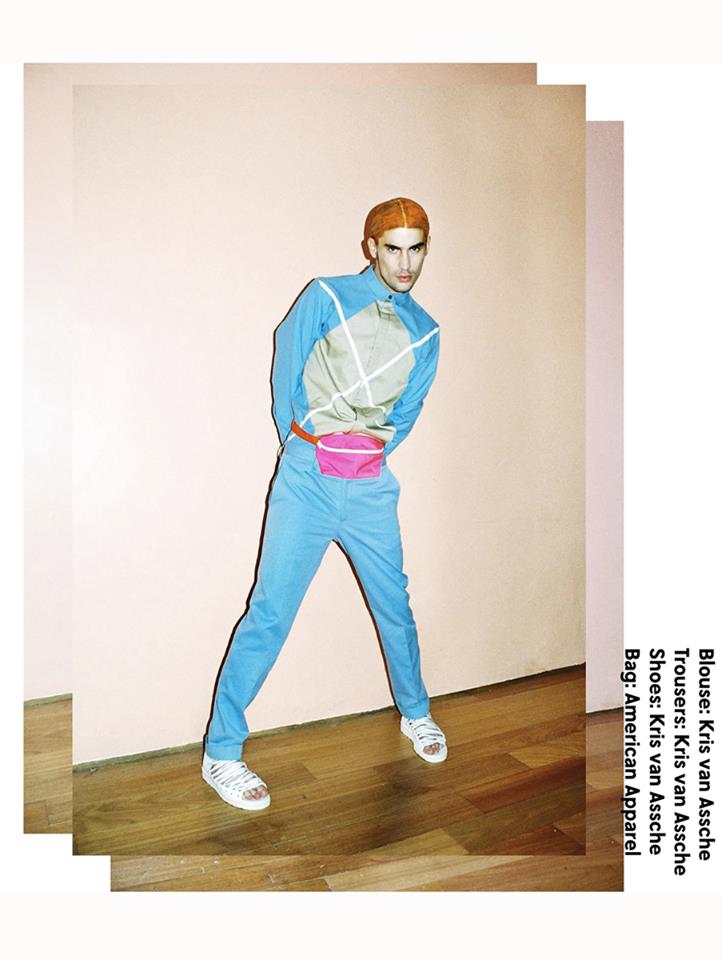 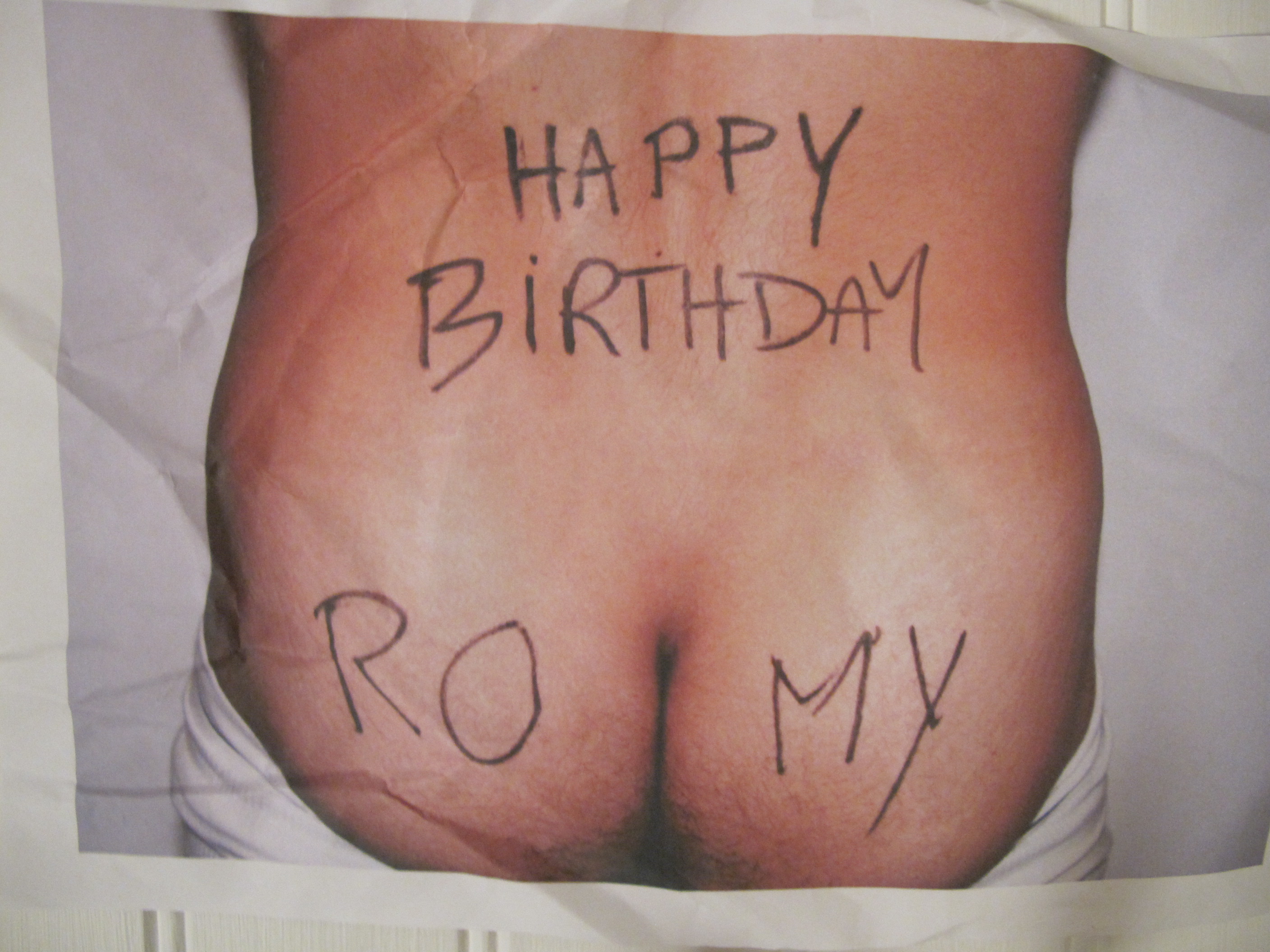