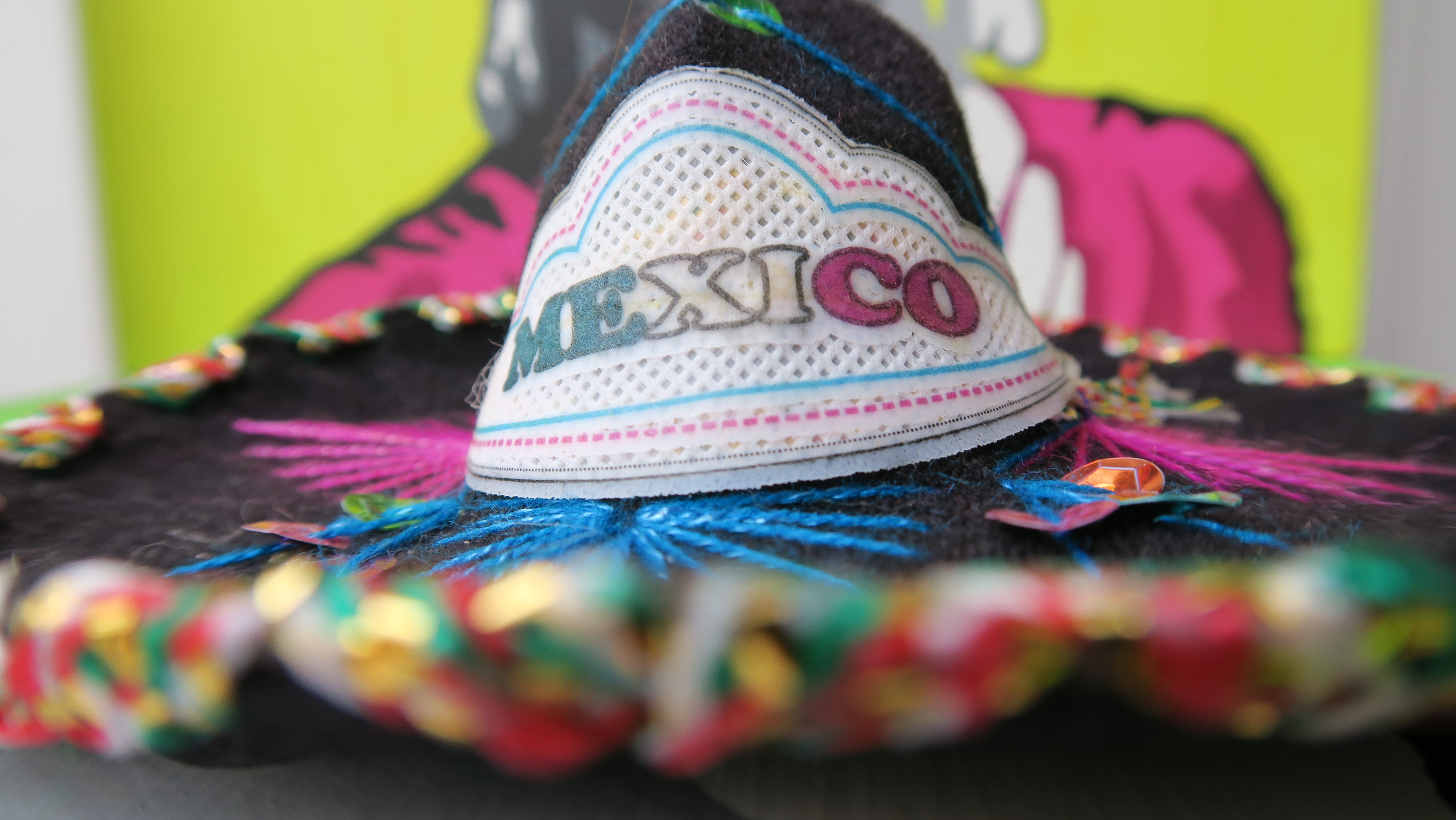 Mexico is an amazing country which I’ve had the chance to visit several times in the past and will visit again in the future. I have a very good Mexican friend living over there. She showed me how to live life by the rhythm of the Mexicans. Thanks to her I have discovered a magical place.

Mexico has become one of the flagship destinations for travelers for a variety of reasons. It’s easy to get to. Flights are not too expensive. The cost of living over there is low. It’s safe and well suited for tourism. If you want to drive, the roads are quite easy. You just have to avoid Mexico City and Guadalajara where it’s a bit of a mess. Mexico is a good starting point for visiting Central America, and it’s more fun than the United States. Cause the Mexicans have a sacred sense of celebration.

Before my first stay, I had just spent 3 weeks travelling around the United States and Canada. What immediately impressed me was that Mexico is alive! It reminded me a lot of Thailand where you can find everything. There are very modern buildings next to traditional houses, or street food stands at the entrance to the giant malls. Modernity and tradition are juxtaposed. The smell of good food follows you around everywhere you go.  You can eat at all hours of the day, and for a small price.

The Mexicans are happy, and it shows. All you need to do is to spend a Sunday afternoon in a traditional family restaurant : kids and parents eating tacos, mariachis, tequila and fiesta!

What to visit in Mexico?

Mexico is  big country ! At the airport, you will be asked to fill in an entry form “to the United States of Mexico”. The country is made up of 17 states, with a surface area of almost 2 million square kilometers (3 times the size France). Each state has its own legislation. It is difficult to visit all at once, because there is really a lot to see.

There are incredible beaches on both the Pacific and Caribbean sides. There are beaches that are more suitable for surfing, others for diving, others for relaxing, and some for exploring nature. Also, the country is covered with Mayan temples, some of which can’t be missed. You can venture inland to discover this culture. From north to south, the landscape varies greatly. Mexico alone has 10% of the planet’s biodiversity.

Then there are “the magic villages” which are protected villages and promoted by the government. Having seen a few of these villages, I can tell you that they are truly magical. 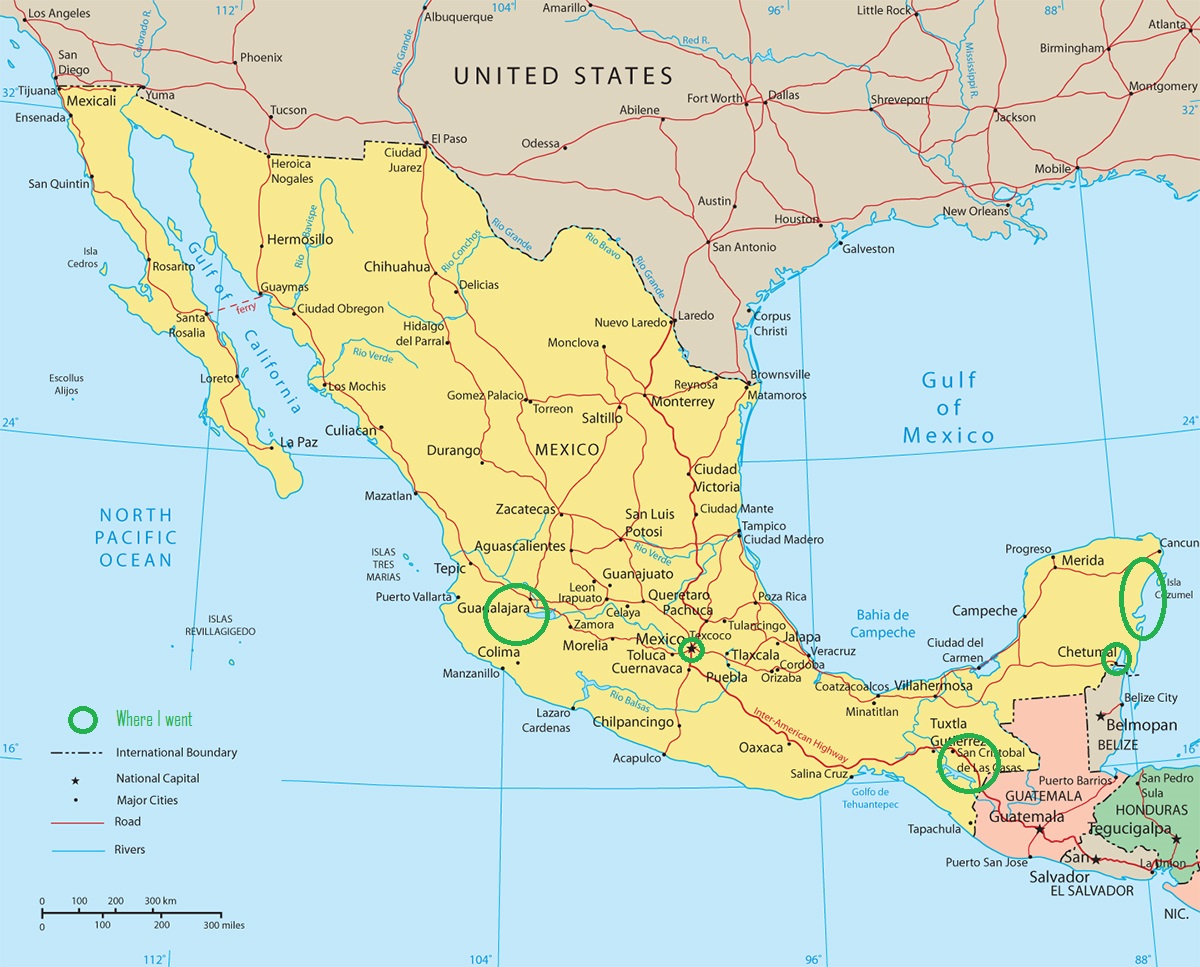 What does one eat in Mexico?

So, as you can see, the main dishes of Mexico are variations of a tortilla with meat, sauce, and beans. This varies from region to region and so does the price. You can find tacos for around 5 pesos (0.25 euros) in the street, or for 50 pesos (2.50 euros) in restaurants. I tried some delicious ones. But I also had them with weird local ingredients such as beef tongue or cow udders. No matter what you order, you will always receive extra tortillas on the side. In Mexico, tortillas are an integral part of life! Expect to eat more and more. 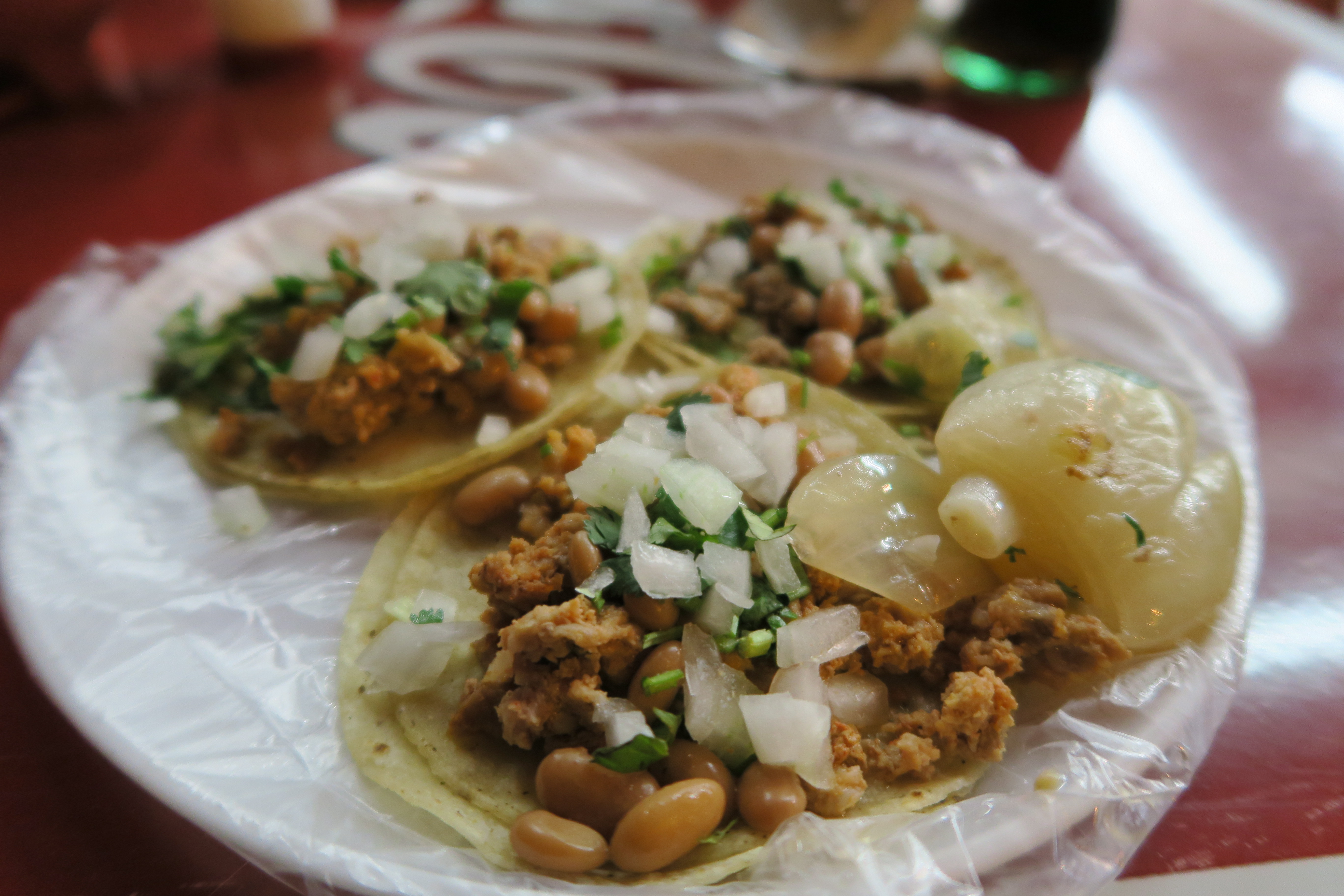 Fortunately, there are not only tortillas. I ate some excellent fried / roasted / grilled chicken dishes. You can find soups, fish dishes or seafood. There are a lot of South American dishes such as ceviche or empanadas. Traditional breakfasts are plentiful. They are made with eggs, red beans, cheese, cream, tortillas … At least it fills you up for the day. Overall, Mexican food is not light, and its alternative is American food. I tried to eat a few vegetables, but they had no taste.

Mexican food is not that spicy. You will often find salsa that you yourself can add to your dish. Every place has their own recipes. It is tasty and moderately spicy. Some offer a pineapple sauce, this one is very strong.

Desserts tend to be very sweet (hello diabetes). These are often made with dulce de leche, sugar or chocolate. I ate churros covered with sugar and stuffed with dulce de leche. After just 2 bites, I had enough. Fortunately, you can also find a lot of fresh fruits. Like in Asia, do not be surprised if the mango you buy is accompanied by a sachet of salt of pepper.

Overall, be prepared gain a few pounds. And if you’re a vegan, outside the very big cities or hippie spots, you will not find much to eat.

When it comes to drinking, tequila and mezcal are mandatory! Not surprisingly, the coffee is very good too. In the streets, you will find a lot of fresh juices. For an orange juice squeezed in front of your eyes you can expect to pay around 10 pesos (0.50 euros).Their oranges are less acidic than in Europe, which is appreciable. One of my favorite juices is the “Jugo Verde” (green juice). It’s a mix of pineapple, orange, cactus, and a bunch of other ingredients. Pay 15 pesos (0.75 euros) and enjoy. 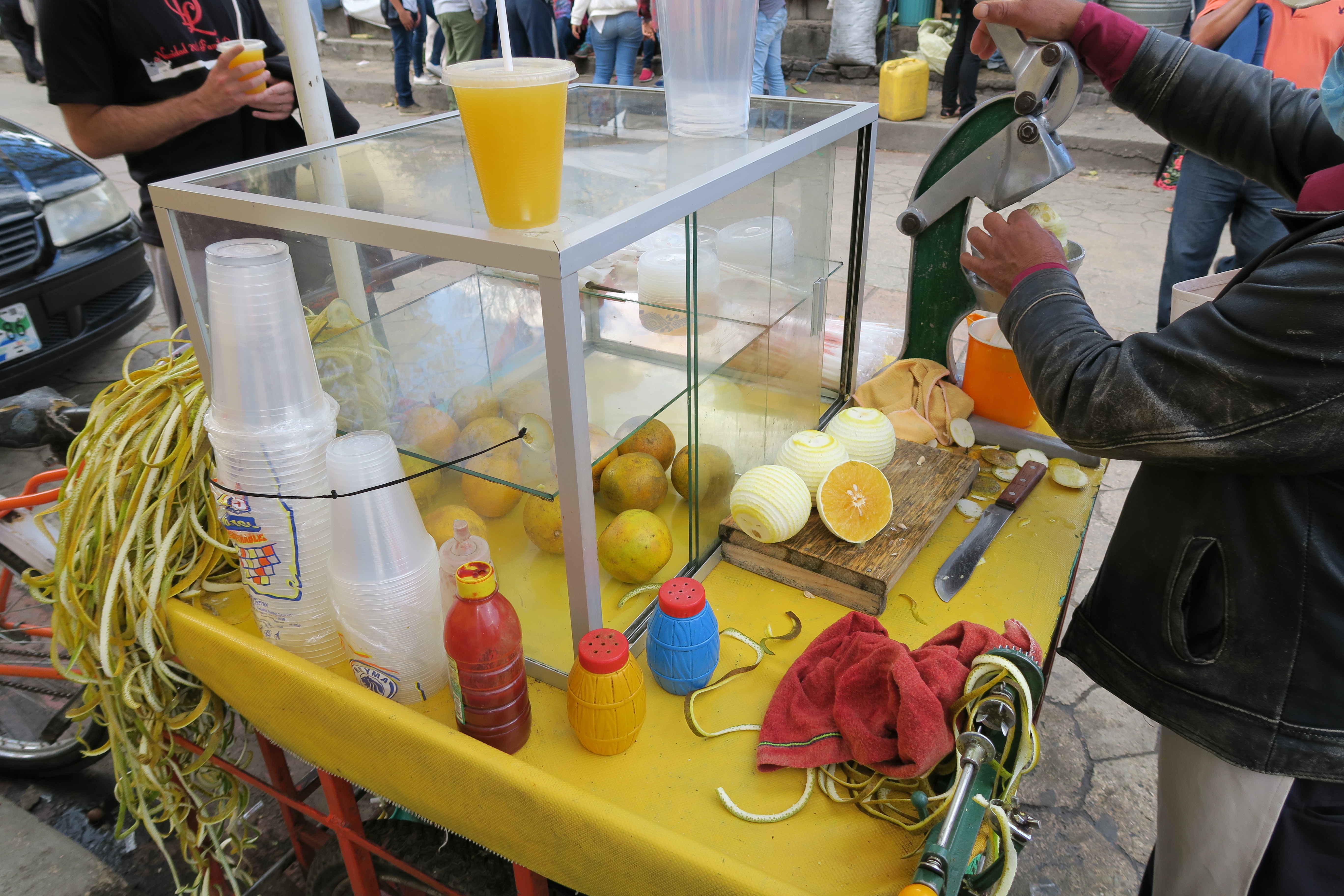 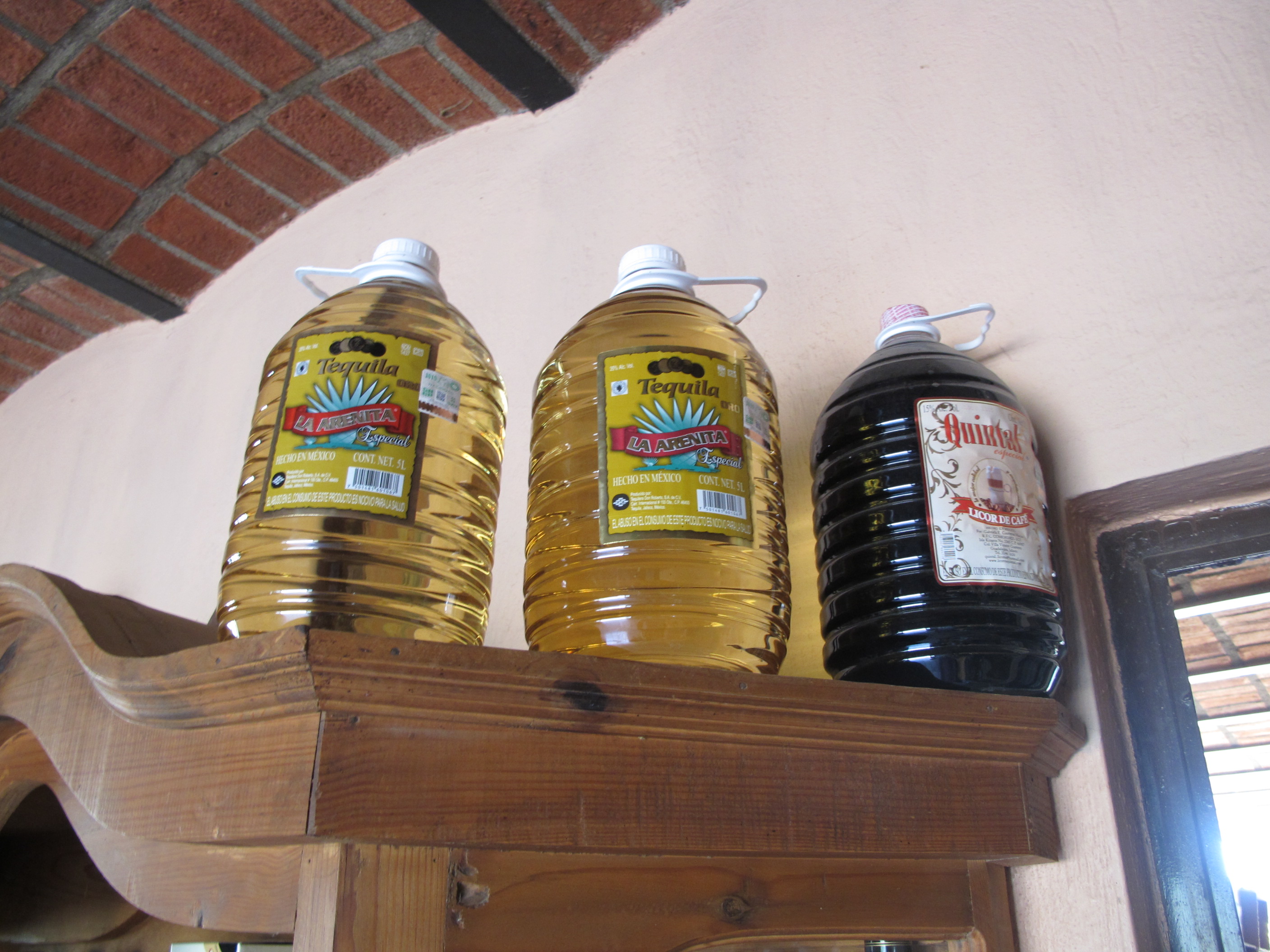 No! Mexico is not a dangerous country as long as basic safety rules are respected. Just like anywhere in the world, do not leave your phone lying around on a table in a cafe. Yes, I heard stories of people being robbed, but they told me they were not paying attention. It’s no more dangerous than in Paris. It is not like in Brazil where one can suddenly end up with a gun in your face. This kind of situation has never occurred to the Mexicans that I know, but at least once to all the Brazilians that I know.

Personally, I never had the feeling I was in any sort of danger. On the contrary, I was often helped. Obviously, if you hang out with narco-traffickers (who can be easily spotted), you can’t complain if something happens to you. And if you visit the north of the country, like Tijuana or Ciudad de Juarez, then yes, there’s a chance you will get caught in a shootout. Okay, the police is corrupt, and there are situations in which they will try to trick you out of a few dollars, but these are exceptions.

Of course, it goes without saying that if you speak Spanish, things will be a lot easier for you in Mexico. 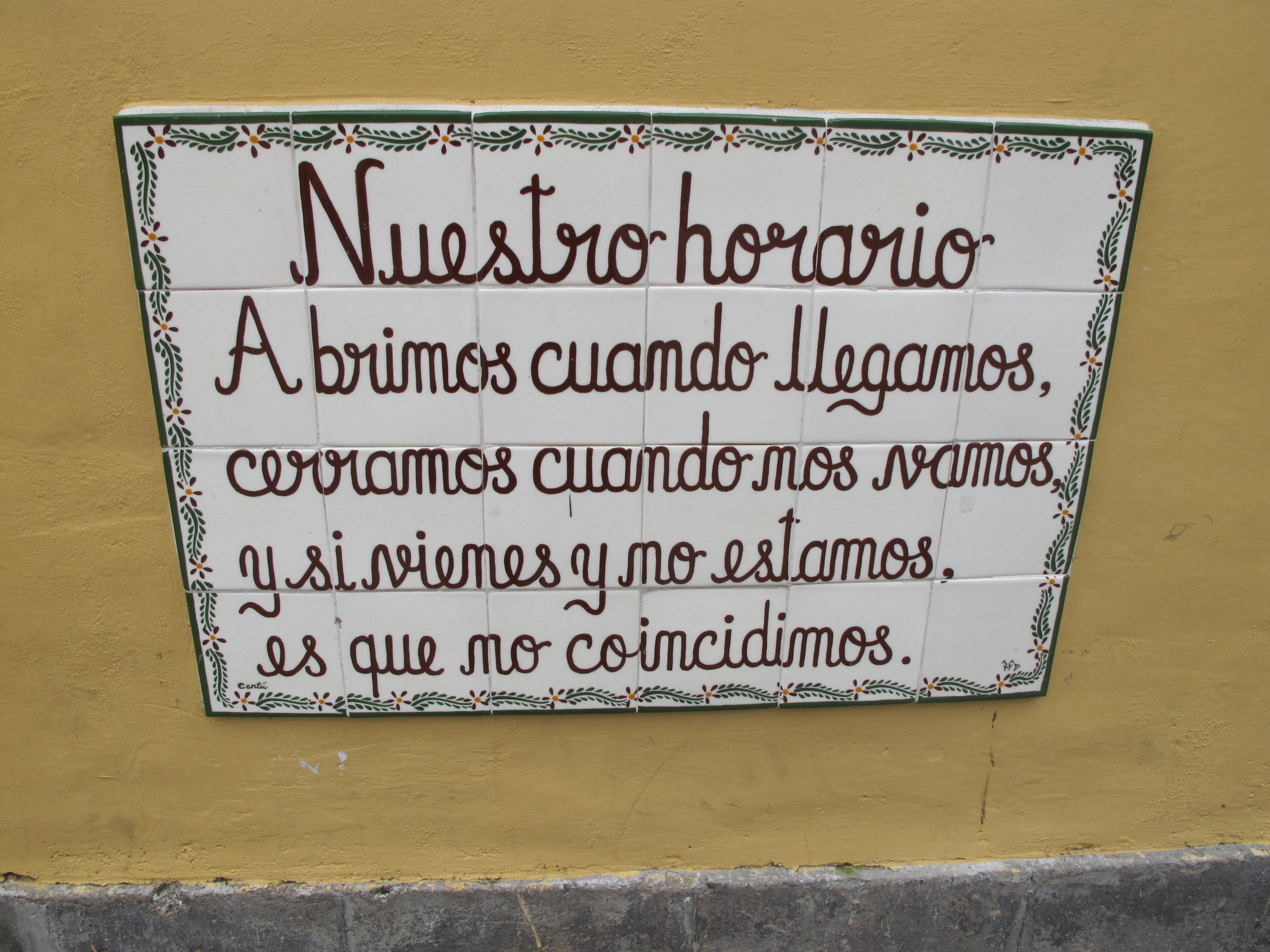 How does one travel around in Mexico?

For long distances, there are domestic flights. Otherwise, there is the bus. All cities are easily accessible, with frequent departures. Of all the countries I visited, Mexican buses are the most incredible. I had been told this beforehand, but still my expectations were limited. The seats are wide, you can practically lie down. There is wifi, a small complimentary snack, a screen with movies, toilets. These are the 1st class busses, but they are still very affordable. There are several bus companies. The best known is Ado, but it is not the only one. If you buy your ticket at the bus station, you have the choice between all companies. I would recommend using the first-class busses for long journeys of more than 5 hours, for which I would also recommend taking a night bus. In general, it is not necessary to buy your ticket too early, a few hours before may be enough. But beware if you decide to travel on a national holiday. In this case, seats can quickly be sold out!

If you are under 25, or if you are a student, you can benefit from a 50% discount on bus fares.

To get around inside the cities, there are all kinds of public transport options: bus, tram, Uber, taxis, collective taxis. If you can, experience the collective taxi, called colectivos.

– If you stay more than 7 days, you have to pay a departure tax (about 340 pesos) when leaving the country. This tax is usually included in the airline ticket. So, if you leave by plane, you will incur no additional charges. But if after 7 days you cross the border by car/bus, you will have to pay this tax at customs.

For reasons I can’t explain, during one of my stays, I arrived by land, and I left by plane 6 days later, but at the airport I had to go to the immigration office to confirm that I had only been in the country for 6 days, otherwise I would have to pay the departure tax (even though this was included in my plane ticket). I was told that it was because I had arrived by land. So, make sure to always keep your entry form receipts until after you leave the country.

– Rather surprisingly, the postal service is obsolete. To buy a stamp, you have to go to a post office, but there only seem to exist about a handful throughout the entire country. For example, there are only 2 in the state of Quintana Roo, with only 2 employees who are not in a hurry, and no machines at which to buy stamps, so be patient. It seems that some hotels and pharmacies sell stamps to help tourists. Once your postcard is in the mail, it takes 3 to 6 weeks for it to reach its destination. This also holds true when sending something to Mexico. A letter to Mexico will take at least 3 weeks to arrive.

– Mexico City, the capital. A must see.

– State of las Chiapas, San Cristobal and its surroundings.

– State of Quintana Roo, Playa del Carmen and its surroundings.

– Tijuana. The city on the border of the United States, where Americans come to “let loose” every weekend. It seems that it’s worth a look.

– Puerto Vallarta in the state of Jalisco. It is the big seaside resort a few hours from Guadalajara. Unfortunately, it is very popular with Americans and Canadians who have direct flights to this city. You have to see the villages in the vicinity, especially Yelapa which is only accessible by boat.

– Acapulco, in the State of Guerrero. It is the same kind as Puerto Vallarta, with a nod to the famous series of the 90s.

– The State of Oaxaca, well known for its temples and pyramids. A must if you are passionate about history.

– The Pacific coast of Las Chiapas. That is my great regret. I had to postpone this trip for lack of time. Almost nobody goes, and it seems that it is incredible.

– The State of Yucatan, and the cities of Merida and Valladolid in particular. It seems that it is magnificent.

– And the other “magic villages” that are scattered all over the country. Here is the list: http://www.pueblosmexico.com.mx/